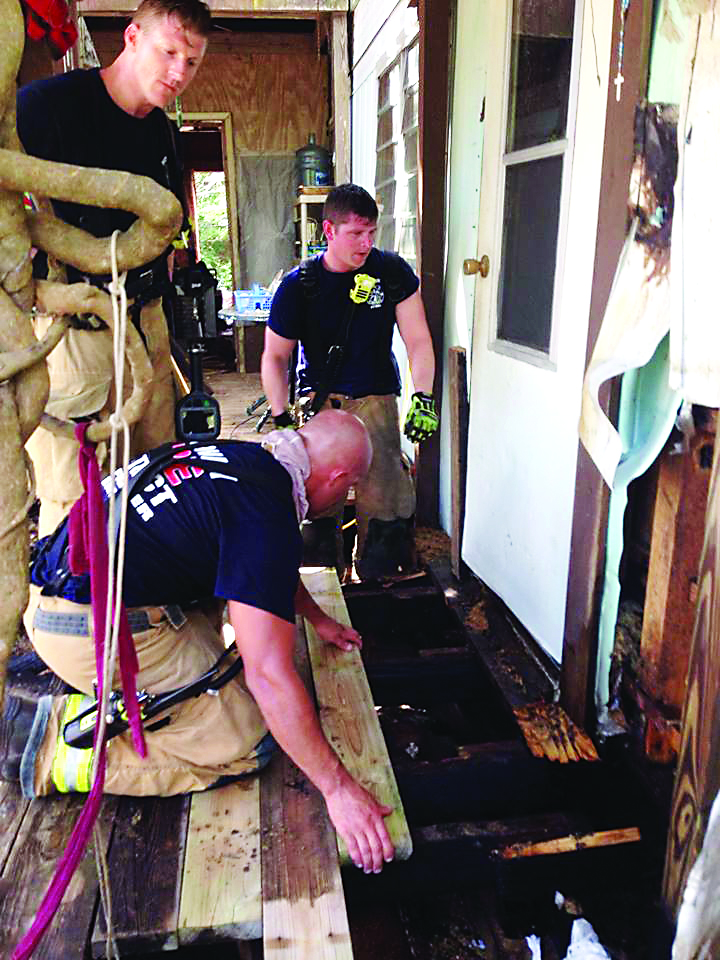 Midway Fire Department is no stranger to going above and beyond. And lately, they’ve been on a roll with their giving.
Less than a week after they finished a job one man set out to do and was unable to finish due to a medical emergency, Midway firefighters helped ensure an elderly man, who almost lost his home in a fire, could have some piece of mind following a blaze at his residence.
Back on August 25, Midway firefighters were called out to a mobile home fire at 2 p.m. at the 6400 block of Clay Circle.
When firefighters arrived, they were able to extinguish the blaze, which was contained to the exterior of the home and some of the inside walls.
After learning one of the mobile home’s residents was elderly and needed help getting into his home, firefighters from Midway’s “A shift” took wood pieces that were on the resident’s property and helped rebuild his porch, which was damaged during the blaze. Firefighters helped rebuild the porch to ensure the man could get in and out of his home comfortably.
“The man is in pretty poor health and has a hard time getting around,” said Midway Fire District Chief Jon Kanzigg. “The porch was burned during the blaze and we had to pull it up to fight the fire.”
There are two residents who live at the home, and they were able to evacuate the home when the fire broke out.
A cigarette started the blaze, according to Kanzigg.
Kanzigg said his fire crew from A shift didn’t hesitate to help rebuild the porch after the fire, even doing it in part of their heavy firefighter uniforms.
“The man had the lumber in his yard and they took it and rebuilt it for him,” Kanzigg said. “They did it right after they put the fire out.”
The actions from the A Shift came just three days after firefighters with Midway were called out to a medical emergency on Watermark Cove in Gulf Breeze. A lawn maintenance man suffered an allergic reaction from a bee sting while he was sprucing up a resident’s yard. After the man was transported to an area hospital, firefighters stayed at the resident’s home and finished mowing the lawn and secured the businessman’s equipment for him.