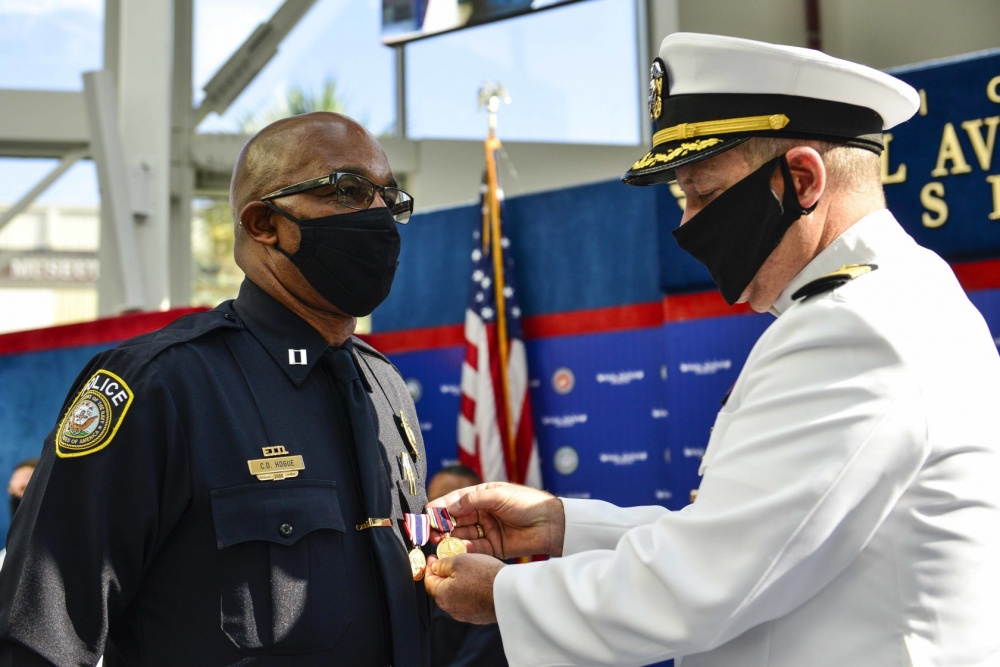 The attack resulted in the deaths of three Sailors and injuries to eight individuals.

NAS Pensacola’s NSF were the first at the scene, soon joined by paramedics and firefighters from FEMSGC.  Along with other local first responders, NSF and FEMSGC saved lives that day.

“Without hesitation, these brave men and women ran toward untold danger, not knowing if they would return,” said Capt. Tim Kinsella, commanding officer of NAS Pensacola.  “They stared pure evil in the face, they stood their ground and they saved lives. I am honored and humbled to present the security and emergency services personnel with these prestigious awards.”

Kinsella presented the awards to military and civilian personnel. The list of awardees and awards were:

Secretary of Defense Medal of Freedom

Secretary of the Navy Distinguished Civilian Medal for Valor

Vice Adm. Yancy Lindsey, commander, Navy Installations Command, provided a prerecorded message for the awardees that was played during the ceremony.

“Your rapid response in a chaotic moment saved an untold number of lives,” said Lindsey.  “Some of those in our audience today are here because of your courage and your service.  They and I… salute and thank you.”

“May we be inspired by their examples and, as they did, may we always answer the call of our fellow man in a time of dire need.”

Due to concerns of the spread of the Coronavirus (COVID-19), the ceremony was not open to the public.  The ceremony was broadcasted live on the NAS Pensacola Facebook page. The video can be viewed at www.facebook.com/NASPCOLA