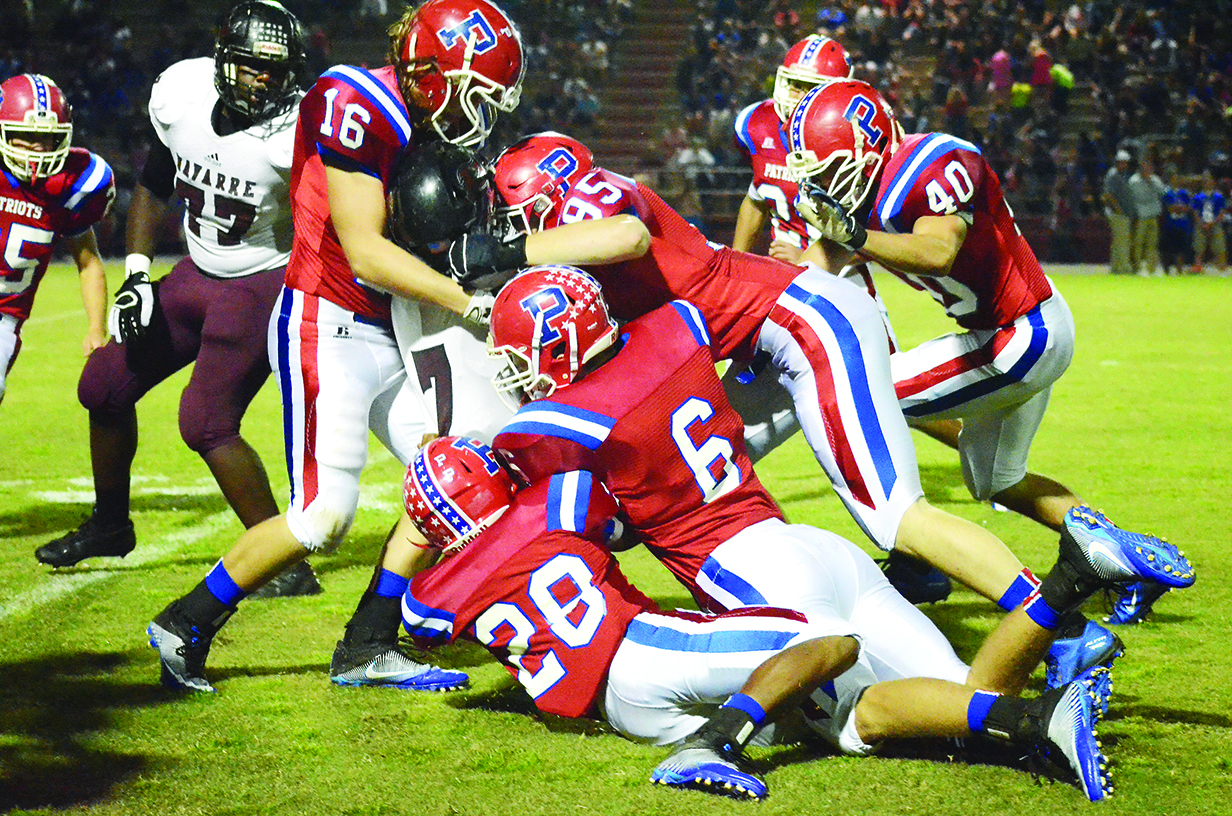 Michael Carter has made big plays for Navarre High School as one of the top running backs in the region, but last Friday night his 63-yard touchdown pass helped the Raiders edge Pace High School 42-28.
The Patriots lost momentum with 38 seconds to go in the first half after Michael Carter broke the 14-14 stalemate with a meticulously-executed touchdown pass to Jordan Williams.
“That felt really great, especially with it being my first year playing football…” Williams said about the catch. “I’m just really blessed because I started off playing basketball so far me to transition, I feel so excited and blessed to play this sport.
“We work on that every day [in practice], it’s just that today we actually ran it the first time during the game so you know, I’m glad we got that play down finally,” Williams said.
Navarre got on the board early in the first half when Caine Adamson found Chandler Cooper wide open for a 30-yard touchdown pass less than one minute into the match. Carter rushed for a huge gain on second down and set the team up for the score, but failed to produce many more yards in the first quarter.

Pace did well to minimize Carter’s impact on the ground and was successful in holding him to under 25 yards in the first half, while at the same time achieving massive gains from Anthony Johnson Jr. —who rushed for 163 yards on 33 carries during the night.
Bo Herring and Caleb Dale spearheaded the effort against Johnson and Pace’s rushing game, combining for a total of 19 tackles and ending many of the Patriots’ offensive drives. Despite anticipating the rush from Johnson, the Raiders’ defense had trouble keeping him out of the end zone as he ran for all four of Pace’s touchdowns — including his second of the night which came after seven consecutive carries.
Navarre came into the second half with all the momentum but was not able to extend their lead until 5 minutes before the start of the fourth quarter, when Carter ran around the left side of the line for a 54-yard touchdown and a 28-14 lead.
At the start of the fourth quarter Pace quarterback Damean Bivins handed the ball off to Johnson around the 40-yard line and continued to do so for the next five plays. Navarre held Johnson to a third-and-1 situation with strong efforts from Dale and Ryan Struck, but he eventually put the Patriots within range of the Raiders’ lead 28-20.
Navarre would end the night with a second trick-play touchdown pass to Williams, this time a 55-yard rocket from Dante Wright.
“We knew what our expectations were gonna be so I don’t feel like there was a lot of pressure you know, we came fully prepared so I feel like we could have gotten this ‘W’ pretty easy,” Williams said.

Navarre travels to Escambia High School tonight to take on the Gators who are 3-4 overall, but are coming off of a 36-0 shutout over Pine Forest. The Raiders are 5-0 and are sitting on the precipice of a 17-game regular-season winning streak. The game is set to kick at 7:30 p.m. at Escambia High School.