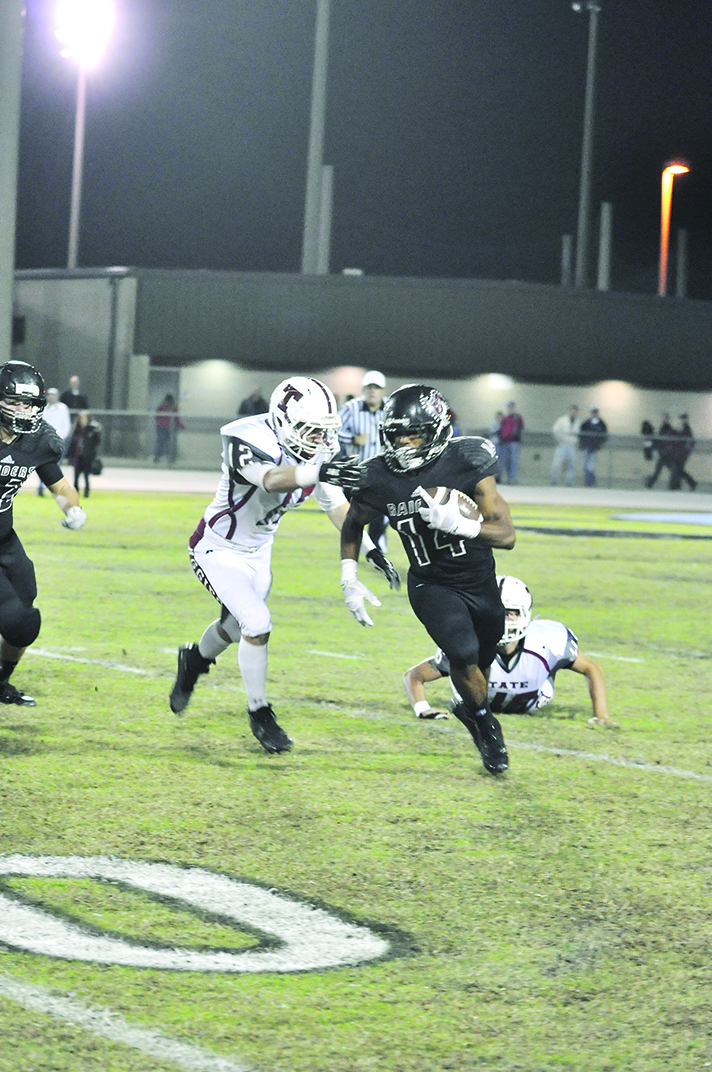 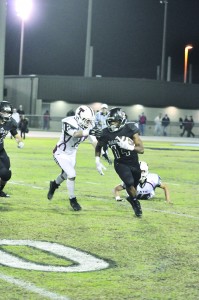 Friday night’s matchup between the Tate Aggies and the Raiders found the packed Navarre cheering section at Bennett C. Russell Stadium pitched across an entire spectrum of emotion. The game ended in both tears at the Raiders’ defeat and smiles at the team’s defiant showing. The Region 1-6A quarterfinals certainly proved to be Tate’s night; the Aggies advanced to the next round of the playoffs with an extraordinary 23-22 victory over Navarre in double overtime.

“Tate’s got a great team,” Raiders head coach Jay Walls said. “They’re really good. This is a game that could have gone either way.” Both teams certainly flexed defensive muscle early in the brawl. Despite four turnovers, Navarre scored the only points of the first half with Hassan Williams’ 43-yard rushing touchdown late in the second quarter. The Aggies managed to tie the score on their first possession in the second half, but Williams’ conversion halfway through the fourth quarter lifted the Raiders 13-7 with a missed PAT.

Tate once again evened the score at the tail end of the second half, scoring a 23-yard rushing touchdown. The crowd erupted as Navarre, in a spectacular play, blocked the Aggies’ extra point attempt to close out regulation time. An exchange of field goals pushed the teams into a second overtime, where Aggie Alondo Thompkins completed a touchdown pass to extend Tate’s lead 23-16.

The crowd roared as Raider Michael Sandle completed Sage Chambers’ pass to score, but another missed PAT handed the evening to Tate by one point.

Walls said of his team’s effort: “I’m proud of them. They did not quit.” Despite the loss, he and his Raiders still hold a history-making record with their perfect ten-game run. “The season was a lot of fun,” he said as he reflected on the feat. “A lot of accomplishments this season.”

Tate will face District 1-6A rival Pine Forest on November 20.