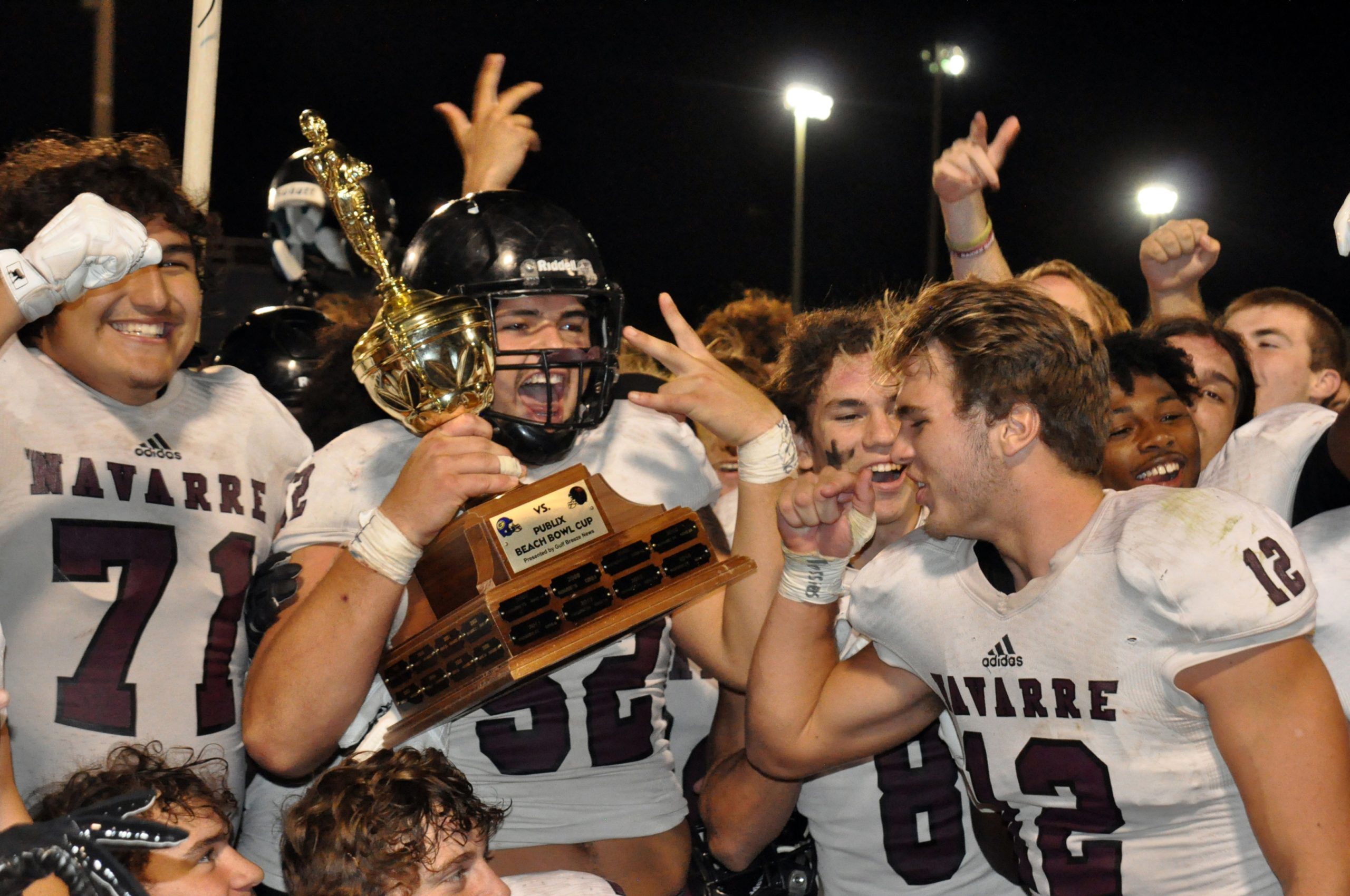 Grady Kelly and the Raiders relish retaining the Beach Bowl trophy for the fourth time after defeating the Gulf Breeze Dolphins 35-21. (Photo by Stuart Camp)

Gulf Breeze didn’t make it easy for Navarre to keep possession of the Beach Bowl trophy Friday night, eventually ending in a 35-21 victory for the Raiders.

The Raiders (2-0) surfed through the turbulence of a two-touchdown deficit in the first half and blanked the home team the entire second half to earn the trophy celebration after the game.

Between the defense and running game, the Raiders victory materialized. However, there were moments where Gulf Breeze (0-2) looked formidable.

It took a 28-point rally – with three unanswered touchdowns — to tame the Dolphins.

Gulf Breeze rocked the Raiders back on their heels early with a 76-yard scoring strike by Ryland McCurdy to Michael Sawarynski on the right sideline. It appeared that on third and long, the Raiders’ secondary bit on a play-action, and the Dolphin receiver was alone with open field ahead.

After tying the score at seven apiece on Jaden Rivera’s first touchdown of the night, Gulf Breeze pinned Navarre with a 21-7 deficit, including another big 42-yard passing touchdown by McCurdy.

“The game went not entirely our way,” said senior offensive tackle Elijah Melendez. “We game planned for a certain defense, and they showed us something different. So, we overcame that. We saw some film, we talked in our groups, and we got after it as a team.”

Down two touchdowns with 8:17 on the clock, the Raiders went to work. That resulted in Rivera’s second score, a four-yarder up the guts of the defense, and a 37-yard, over-the-top touchdown pass by Jason Deal to Trent Hall. 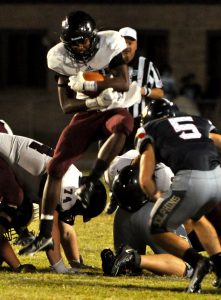 Jaden Rivera jumps into open space in the second half of the 2020 Beach Bowl. (Photo by Stuart Camp)

At halftime, they were tied.

“I was just proud of how our guys kept playing. Coming back and tie it up before the half way big,” head coach Jay Walls said. “Our defense played outstanding after the first quarter. They settled down and played good football (in the) second quarter, and allowed us to get back in it.”

That momentum carried into the second half, where Rivera tallied his third touchdown of the game – and gave Navarre the lead – with 6:38 in the third quarter.

Defense tightened and put Gulf Breeze’s special teams under pressure in the second half. And the Raiders capitalized on a punting mistake — a muffed snap – by taking over on the Dolphins 15-yard line.

“That was huge,” Walls said. “It took all the momentum away from them, and we had it all. That was a gift for sure.”

Two handoffs to Raider running back T.J. Peltier rolled up those 15 yards and ended up putting the final seven points on the final score.

The defense, led by Grady Kelly, got a strong effort from middle linebacker Nate Hering. Trying to run away from Kelly’s domain, the Dolphins offense attacked elsewhere. And Hering nearly got double-digits in solo tackles. 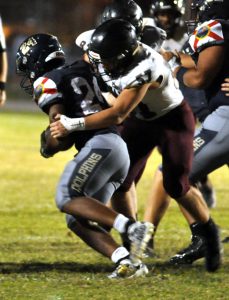 “We knew what we were getting into. It was a mess at first, but we overcame and conquered,” the senior linebacker said. “I was there when I needed to be.”

Next up for the Raiders is a four-round tilt against the Choctaw Indians (0-3) on Friday. Kickoff at Navarre’s Russell Stadium is at 7:30 p.m.