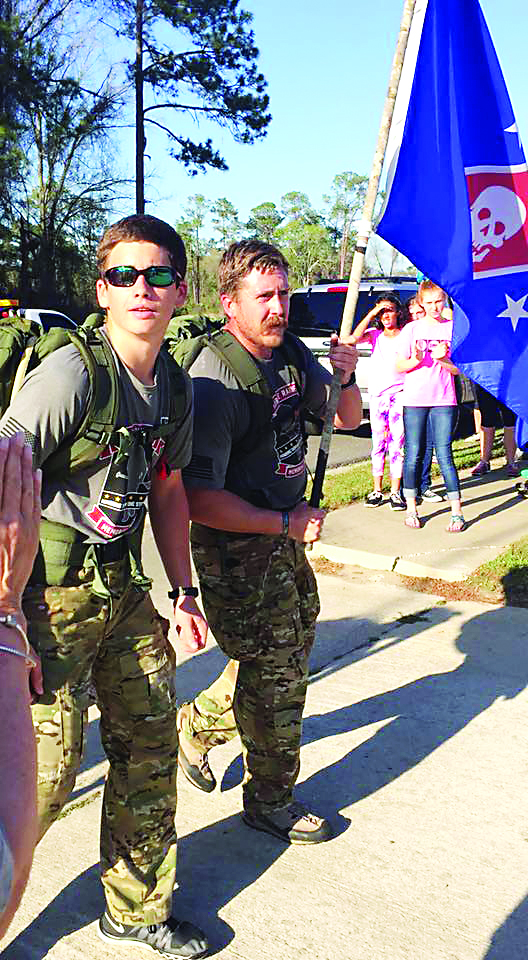 A star Navarre High School football player and basketball player traded in his cleats and basketball shoes for a pair of running shoes to participate in the 770-mile Marine Raider Memorial Ruck March from Navarre to Camp Lejeune in North Carolina, which paid tribute to the 7 Marines who perished in a Blackhawk helicopter training exercise in the Santa Rosa Sound a year ago.
The 16-year-old sophomore, Garrett Schluter, first learned about the ruck march from his uncle Mohammed “Mo” Sheik. Sheik was good friends with one of the Marines who perished in the Blackhawk helicopter crash in the sound back on March 10, 2015. His Uncle “Mo” had plans to participate in the ruck march on behalf of his late friend.
When he heard about his uncle’s interest in the march, without hesitation, the teen asked his uncle if he could participate with him.
“I asked my Uncle Mo if I could ruck with him,” Garrettt said. “He called me back and said ‘Yeah, you can do it.’”
As the ruck march drew closer, Garrett’s uncle found out he was being deployed to the Middle East. His deployment ultimately meant he would not be able to march to Camp Lejeune with Garrett.
“That didn’t stop me from doing it,” Garrett said. “The thing that really pushed me was I wanted to show the (ruckers) that these younger kids appreciate what they do.”
A documentary crew road with the participants of the ruck march, and Garrett is playing a key role in the film. The teen said he wants to prove his dedication to the men who died aboard the helicopter that night.
“I wanted to ruck with my uncle, and when he got deployed I was given the option not to go. But instead, I stuck with it and wanted to do it for him, and the men,” Garrett said.
Riding along with him is his mother Jennifer, a former Navy Corpsman who worked in military hospitals throughout her tenure with the Navy. She also served 3 years at Camp Lejeune providing basic medical support for the Marines.
“It was a last minute thing,” his mother said, insisting she wasn’t joining in on the march just for her son. “They had one of their Corpsman drop out, and they were short one. So they asked me if I could take over. I’m not an actual doctor in the medical world, but we are considered doctors without licenses because of our training.”
Since the start of the march, Jennifer has put in several long shifts to make sure the ruckers are ready for the road ahead of them. Every once in a while, she peeks outside to see how her son is doing.
“He’s doing incredibly fantastic. (At first) the Marines were concerned, but he’s earned all of their respect,” she said. “To train for this, he would get up 5 of the 7 days of the week and put on his weight packs and would march 1 to 13 miles. He really pushed himself in training and he’s holding up great.”
Garrett is marching with Team 6, which is paying tribute to U.S. Marine Corps Capt. Stanford H. Shaw.
The teen is part of one of 7 teams participating in the march. Each team does a stretch of the route and each team pays tribute to one of the seven Marines that perished in the training exercise accident last March.
“It’s like a Leap Frog. Team 1 starts off and walks a certain amount of miles, and then Team 2 takes over after they get done. The first day we walked 10.1 miles, the second day we did 13 miles, Sunday we did 9 miles and we did 10 miles (on Monday),” Garrett said.
When his mother was asked what her son’s response was when he found out his Uncle “Mo” wasn’t going to be able to participate, she said without a doubt Garrett still wanted to participate in the march.
“He told us ‘Mom, I really want to do it for the Marines and for Uncle Mo,’” Jennifer said.