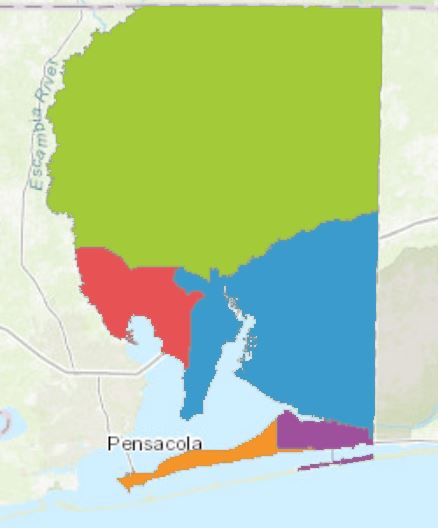 Santa Rosa County GIS Coordinate Tonya Gallagher during today’s meeting made a presentation, suggesting the community of Holley be shifted into District 2 so that each of the five commissioners more equally represents a portion of the county’s 188,000 population.

The proposed change for Holley would shift around 2,490 residents from District 4 into District 2, per today’s presentation.

District 4 Commissioner Dave Piech said he would be ok with Holley being shifted into District 2 to even out the representation.

However, all three north end commissioners expressed concerns about the proposed changes or support for leaving districting “as is” and not pursuing redistricting.

“I am fully happy with my district lines,” said District 3 Commissioner James Calkins. “Commissioner Parker made some excellent points.”

Calkins jokingly added that businesses which have the Holley-Navarre name, such as Holley-Navarre Water System, would have to be changed to Holley-Milton.

A representative from Nabors Giblin, which currently provides legal counsel for the board, said that the county could possible use “geographic integrity” as a reason not to pursue redistricting.

Commissioners will further discuss the matter during their November 9 meeting and, depending on public input, may take an official vote during that meeting.

Per state requirements, redistricting has to be pursued during an odd year and could not be done in 2022.

Citizens can have their say in the matter before commissioners decide via this webpage: https://survey123.arcgis.com/share/e0d8b54e3d004adfb29c4dcb430e3c48?fbclid=IwAR1sWMQ9b6_4NDfTX_QoI5qATEhSpG3CIAeuCPXGEmJydnVnOTaFtD4pcWc