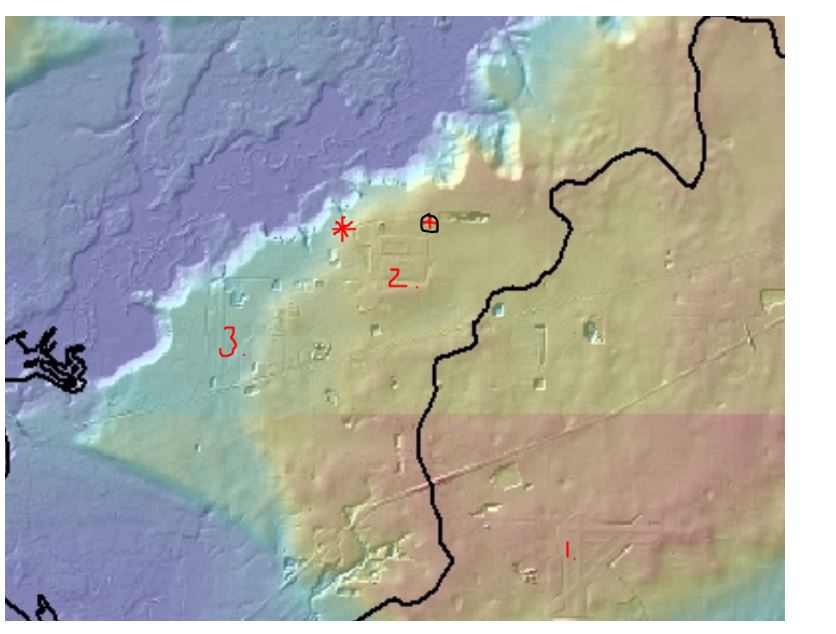 LIDAR MAP IMAGE: The red asterisk (located northwest of the red numeral 2) is the proposed location for the new waste water treatment plant, which is in a low-lying area (as seen by the blue color), whereas the small red cross within the black ink circle is land owned by Santa Rosa County, which a Watershed Coordinator working for the University of West Florida believes would be a more suitable location for the new WWTP. Submitted graphic.

EDITOR’S NOTE: Barbara Albrecht submitted this plea to city and county leaders ahead of tomorrow’s discussion on the issue, which is expected to take place during the 8:30 a.m. Board of County Commission meeting at 6495 Caroline Street in Milton.

Thank you for your time and the opportunity to approach you on a very important decision which will have ramifications for the next two or three generations.

I recently had the opportunity to tour the site selected for the new WWTP (waste water treatment plant) to be located in East Milton, just west of the Santa Rosa Correctional Institute.  The site is located in the riparian zone and flood plain of the Blackwater River, a designated *Outstanding Florida Water* by the Florida Department of Environmental Protection and as such warrants an additional level of protection from contamination and has the designation of Special Waters of the State and Outstand national Resource Waters, in other words, please do not be hasty in the location of this facility which will have a lifespan of ~40-50 years.

Santa Rosa County, the north end and south end is growing at a rapid rate.  There is no question that the current City of Milton WWTP is outdated and *also* located in a vulnerable location due to its proximity to the Blackwater River.  I write *also* because the current Pensacola Beach WWTP and the Navarre Beach WWTP are also located in very exposed and high-risk areas.  The Pensacola Main Street Plant was built in the late 1960’s as an advanced WWTP which was already outdated in 1985 – but eked along with minor upgrades until Hurricane Ivan took out the facility in 2004, rendering it unsalvageable.

In 2021, we have more technology available in the area of WWTPs to not just remove nutrients and pathogens, but also the ability to remove pharmaceuticals and emerging *chemicals of concern*, such as PFOS, PFOA and PFAS – found on nearly every airport and military base.

There is much talk about the cost incurred for treating water, and then the manner in which to discharge the volume of 2.5-5.5 Million Gallons per Day (mgd) of treated effluent.  Discussions about spray irrigation and RIBS would be mute, if the quality of water sanitation includes the best and most recent technology available at this time.

The quality of the effluent coming from a state-of-the-art WWTP plant could be used reused in any number of ways and may negate the need for a spray field or RIBS system.

The location of the WWTP is critical, given the data and supporting science of altered weather patterns, increased storm frequency and overall size of tropical events.  The following few aerial maps and LiDAR Maps will illustrate the vulnerability associated with the location selected by the City of Milton.

It goes without say that any project designed and scoped out in 2021 will be cheaper than 2023.  But placement of this highly important facility on stable ground should overrule any concept of ‘saving the public money’ by placing the facility on a lesser valued and far more vulnerable location.

At the very least, the proposed site should have an Environmental Impact Statement Analysis conducted to determine if this site is suitable.  The risk of having sewage and the associated chemicals to treat sewage so close to an Outstanding Florida Water and Waters with Special Designation, literally downhill from the proposed location is irresponsible. The ramifications may not be felt by this City Council, but the citizens which you represent will be left with costly repairs and the potential for contaminating this body of water – the only in the state of Florida to be almost 100% with the bounds of conservation lands.

Please weigh your options carefully.  And let me know if I can help clarify or present the issues brought forth in this letter.

Thank you for your time and attention,