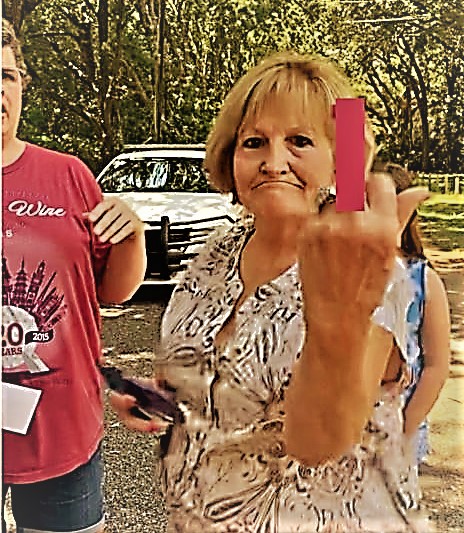 Sherry Chapman of Original Coastal Conservatives recently had a run in with the law over a civil dispute. Watch the video here:

The 2022 Primary Election cycle has brought out the worst in many, especially some fringe GOP Santa Rosa citizens who have crossed the line into spreading lies & misinformation and publicly fat shaming.

Sherry Chapman of Pace is known to spout off repeatedly during county commission meetings in her distinct country drawl. Her behavior online, in my opinion, is even worse.

Expressing an opinion is one thing. Lying about a person or business is another.

I tried several times to explain to Chapman that, no, I did not design a negative mailer which was sent out in the District 2 Commission race. But she refused to delete her comment in a group accusing me of that. Trying to explain it to her was like trying to explain algebra to a defiant child who is unwilling to learn. A friend suggested I get some crayons and draw it out for her. I don’t think that would even work.

If you watch the video above you’ll see Chapman’s behavior, which takes place in front a child. You can see how Santa Rosa Sheriff’s Office deputies warned her with jail and asked her to “set a good example” for the kid, which had been brought to the scene of the civil dispute to which law enforcement responded.

But Chapman isn’t the only one behaving badly.  The 2022 Primary Election has been filled with lies and fat shaming.

Randy Williams, back during the 2020 election cycle, shared a photo of me bending over. Well he’s back again with a vegenance this year. Yesterday he shared a photo of my stomach into a Facebook group along with a derogatory comment. Fortunately, the administrators of that group, Justin Jauss and Lyall Kress, who are staunch 1A advocates, decided Williams went too far. Williams’ post was removed and group members were issued guidance.

The common denominator between these three is their support for District 2 Candidate Kerry Smith. I assume they remain upset with me for exposing Smith’s violent criminal record in this opinion piece: EDITORIAL ON CANDIDATE’S VIOLENT CRIMINAL HISTORY.

So I’ll be glad when the August 23 primary comes and goes. Because I’m confident Smith will lose and hopeful these three individuals will find something constructive to do with their time other than to try to harass and discredit others.