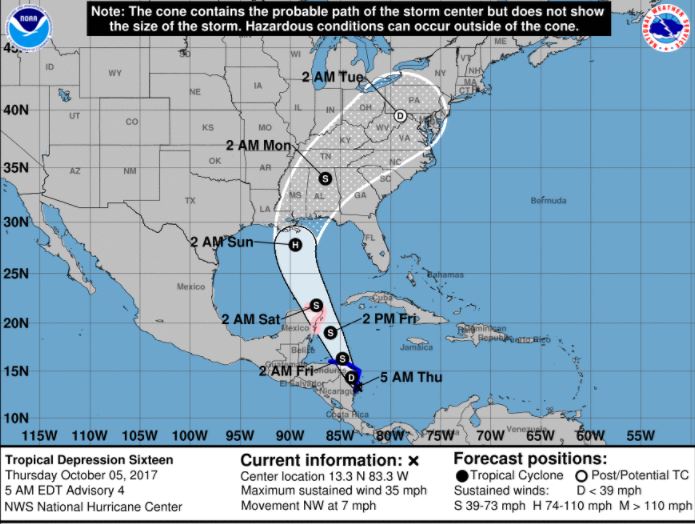 Tropical Depression 16 has not yet strengthened into Tropical Storm Nate as early as expected, and the storm’s projected path overnight required a “fairly substantial westward shift,” per the National Hurricane Center’s 5 a.m. EDT advisory.

“The intensity forecast remains quite uncertain due to expected land interaction today, and possibly again in about 48 hours when the system passes near the Yucatan peninsula. The depression could still become a tropical storm before the center moves over northeastern Nicaragua and eastern Honduras later today,” stated Meteorologist Dan Brown.

In addition to intensity uncertainties, Brown’s discussion explained the forces which are expected to continue steering the storm more toward the west.

According to Brown, after 72 hours, the system is expected to recurve around the northwestward side of the ridge.

“This has required a fairly substantial westward shift in the NHC forecast track at 72 (hours) and beyond,” he said.

The update shows the storm is still expected to reach hurricane strength before making landfall somewhere along the Gulf Coast on Sunday.