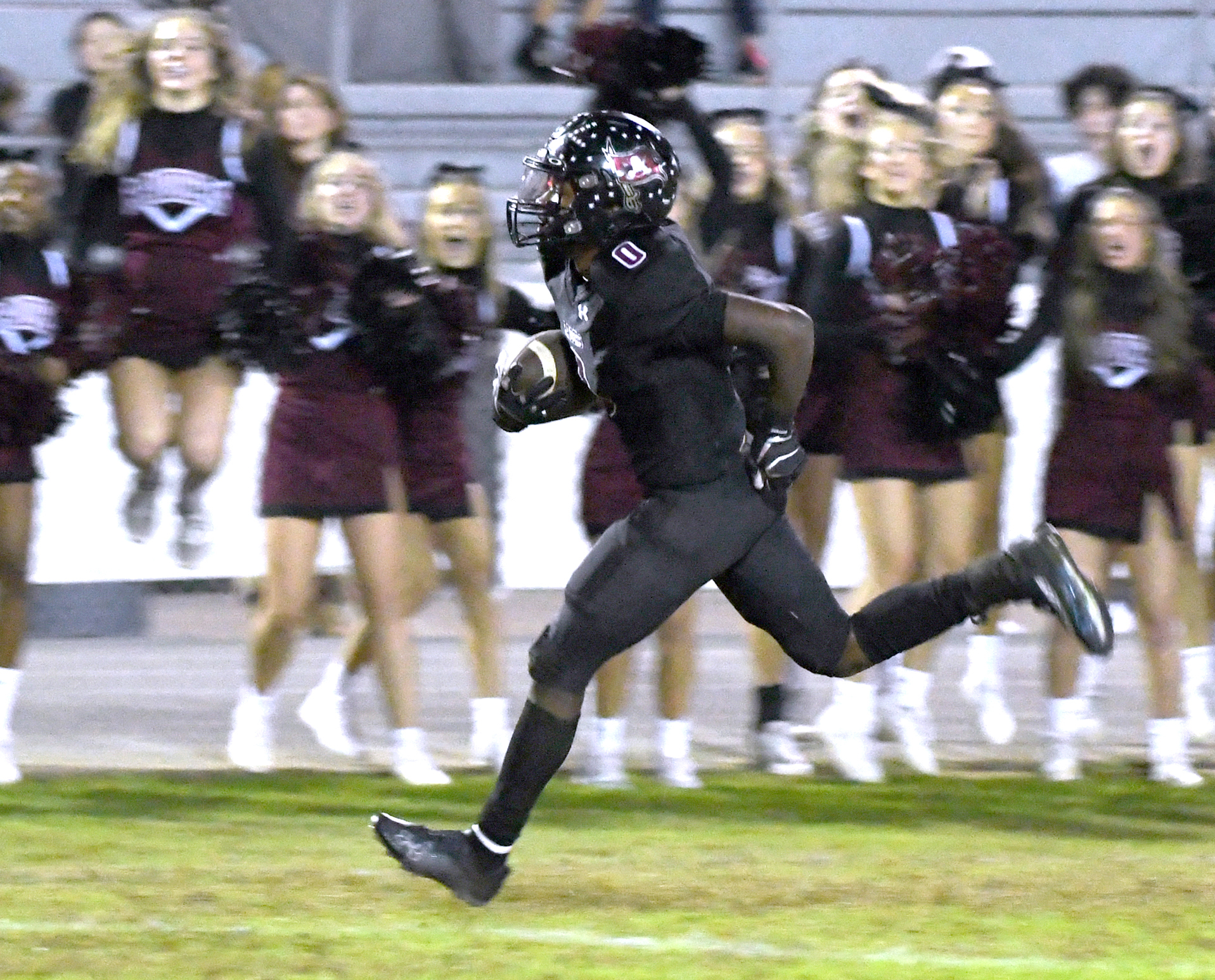 Eddie Love Jr. cruises into the end zone for the Raiders’ third touchdown in the second quarter against Creekside. (Photo by Stuart Camp)

Creekside withstood a second-quarter rally by the Navarre Raiders and pulled away to a definitive 47-20 win in the first round of the class 4S regional playoffs.

The Raiders, who finish this season at 8-3 overall and the district 1 championship, scored all of their points in the second quarter.

Navarre, known to course-correct in the locker room for an improved second half performance, were down 34-20 at halftime. But the visitors opened with a 76-yard scoring drive and clamped down defensively.

“This was one of our better performances,” said Creekside head coach Sean McIntyre. “We executed really well in a lot of phases of the game. Early, our pass defense was a little sketchy. We had some air in our coverage, but we tightened that up in the second half.”

The Knights scored on their first three possessions of the game, pinning 24 points on the Raider defense before a window opened for Navarre.

Eddie Love Jr. broke free for a 65-yard gain, and a facemask penalty put the ball on the Creekside five-yard-line. Two plays later, Love busted in from two-yards out with 4:21 left in the half.

Although the Knights punched in another TD on the next drive, Navarre carried a little momentum on their next possession. Hunter Pfiester hit Reese on a slant pattern, and then found Terence Marshall open down the middle for an over-the-top 42-yard TD with 2:48 showing.

Lightning struck, and Creekside running back Nick Williams fumbled a hand-off exchange on the Knights’ next drive. Raider captain Kiohne Moso wrapped up the ball, and Navarre reversed the direction. Six plays later, Love broke around the right corner for a 10-yard touchdown which cut the lead to 31-20 with 1:18 left in the half.

Except for that brief burst in the second period, Navarre’s offense – especially the powerful running attack — struggled against the Knights.

“The linebackers kept pinching in and as soon as the ball was snapped, they just got me,” Love said.

Success this season meant running fueled passing for the Raiders.

“Right off the bat, they game-planned on how to stop it (run game),” Marshall said. “I think they (pass plays) were open. Some plays I could execute; some plays Hunter could execute. I feel like if we were on the same page, I think the pass game would’ve worked.”

Those was all the points Creekside would allow, but not what they would extract from Navarre’s defense. They tacked on another 13 in the second half.

“At halftime, our spirits were there. We were in the game,” Walls said. “(In the) second half, we needed a spark, and it just didn’t happen.”

Williams ended the night with more than 230 yards on 24 carries.

“I tried to push and lead them as far as I could,” Moso said of his defensive teammates, choking back tears post-game.

The Raiders finished with an 8-3 record, including a district crown.

Creekside’s victory – their fourth in a row – aligned them for a second-round match with district 3 champion Bartram Trail Bears (11-0). The last time they met, the Bears blew out the Knights 59-27.