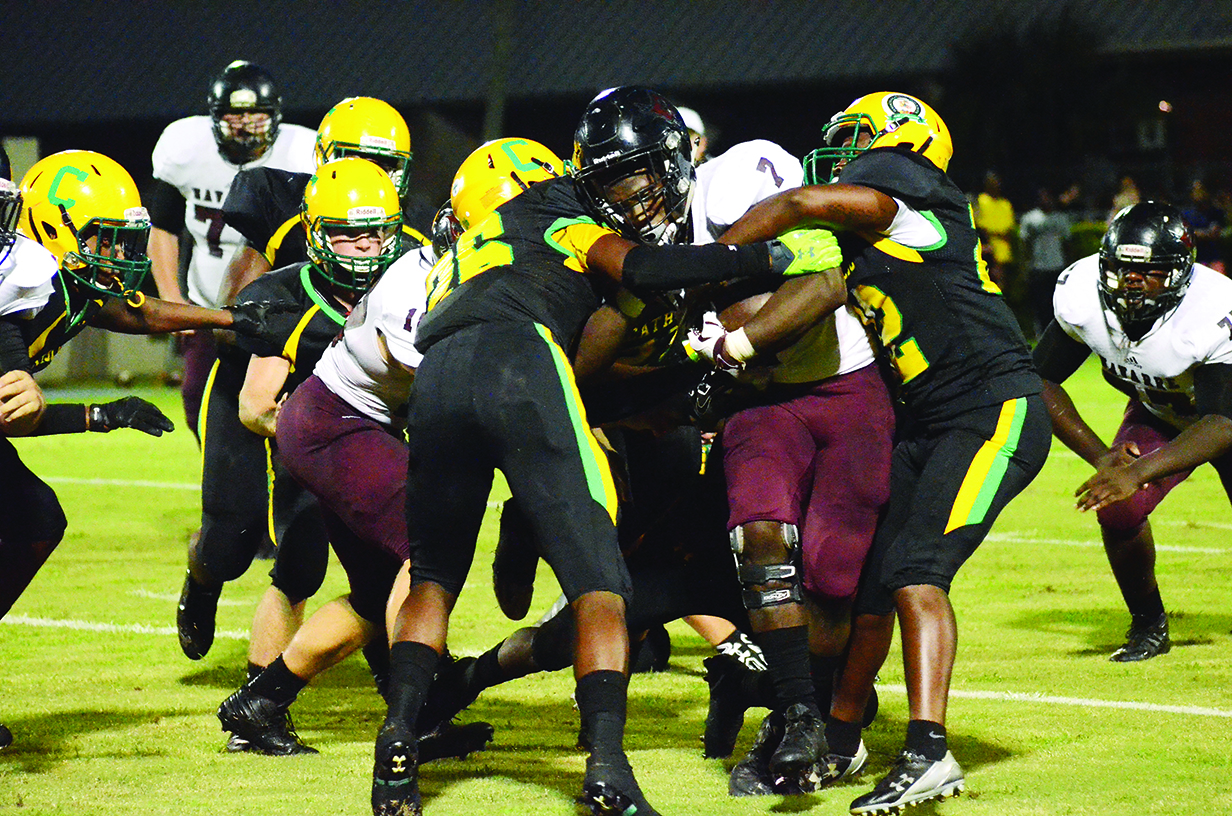 The South Santa Rosa News sports section is brought to you by Carpenter Insurance, Inc.

Pensacola Catholic High School was looking to de-rail Navarre’s freight-train offense before it could build up momentum this season, but the Raiders proved too strong and pulled away during the August 26 match 41-13.
The Crusaders failed to slow down University of North Carolina commit Michael Carter as he went on to score four out of Navarre’s six touchdowns and rush for 153 yards.
Navarre got started early and seemed on a mission, scoring within the first five minutes on their opening 88-yard drive after the defense was able to hold PCHS to a punt.
Junior quarterback Sage Chambers handed-off the ball to Carter on the team’s second possession of the night and with the help of a nice block from the offensive line, broke a couple of tackles on his way to putting Navarre into the lead 7-0.
“We wanted to put points on the board and we did that, it was a great team win.” Chambers said after the game. “The offense worked well, the O-line did a great job, receivers caught the ball, running backs ran the ball, and they all blocked.
“Shout out to the great defense holding them to 13 points, that’s a big win — 41-13,” he said.
Carter is returning from injury after tearing his PCL of his right knee in the third game of the 2015 season and has been recovering with help from the Andrews Institute — who he credits with getting him ready to play in time for the season-opener against PCHS.
“I was in this like state-of-the-art knee brace for like six months, and then whenever I got out of that it was a grind…” Carter said. “Ya know, I’m just so blessed to be near a facility like Andrews because I think if I would have gone anywhere else I wouldn’t have been able to play tonight, just being honest — they take it serious.”
Navarre continued to dominate the match, and despite losing their best offensive lineman, Nick Brahms, two-weeks before the start of the season, continued to protect the quarterback and open up holes for Carter to smash through – finishing the first half 34-6.
PCHS scored with seven minutes left in the second quarter when Kerrick Teamer snatched up a backwards toss from Chambers and returned it to put his team on the board 28-6.
The Raider’s defense held strong and did their part as well, allowing the Crusaders only 185 total yards and one touchdown during the second half.
Navarre defensive back Lee Jones gifted the offense fantastic field position in the second quarter when the Crusaders were forced to punt after their unsuccessful attempt to answer Navarre’s second touchdown. PCHS punter Blake Brazwell took the snap and made contact with the ball, but Jones rushed around the line and dove toward the kickers’ foot — tipping the ball and setting the offense up for a scoring drive.
Crusader quarterback Garrett Foley remained an anchor in his position throughout the match, doing all he could to help PCHS mount a comeback. Unfortunately, he did not seem to be receiving the help he needed on the other end of the ball — completing only 12-out-of-33 passes on the night despite hitting the hands and chest of his targets on multiple occasions.
Some of these incomplete passes could easily have sparked momentum in the Crusader offense with easy third-down conversions and at least one other chance to score. At the beginning of the second quarter, an endzone-bound pass from Foley hit senior wide receiver AJ Yates in the chest and fell incomplete for what could have been a second touchdown.
PCHS drops to 0-1 on the season and travels to Gulf Breeze High School tonight to take on a tough Gulf Breeze side coming off a hard-fought win against Choctawhatchee High School.