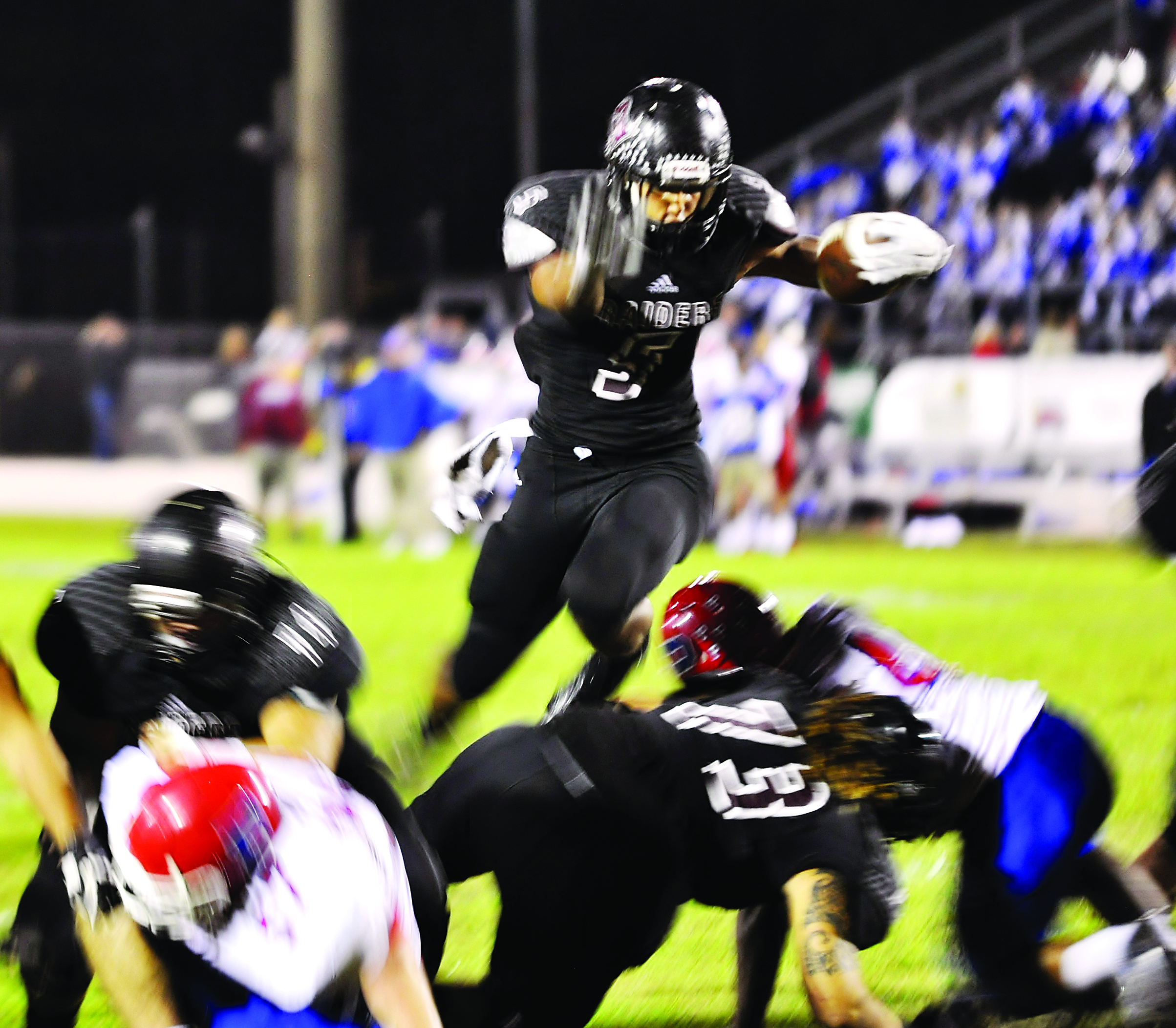 Six-and-oh. Navarre High School beat Pace 42-27 last week to match last year’s best-ever start to a football season.
The Raiders host Escambia (4-2) at 7:30 p.m. Friday with a chance to post the first 7-0 record in program history, but beating the Gators won’t be easy. Escambia has been ranked as high as fourth in The Associated Press Florida High School Football Class 6A Poll (the Gators dropped to 15th in the most recent rankings after losing 21-17 to District 1-6A rival Pine Forest on Friday).
Escambia’s first six opponents have won 62.9 percent of their games (22-13). The Gators have given Class 6A powerhouses Niceville(5-1) and Lake City Columbia (4-1) their only losses and Escambia’s two setbacks have been to the 6-1 Eagles and Louisiana powerhouse Jesuit High School of New Orleans.
Navarre has one marquee win, a 16-14 come-from-behind home grudge-match victory against Choctawhatchee (5-2), but the Raiders’ first six opponents collectively have won just 34.2 percent of their games (13-25).
On the bright side, Navarre has won its last three meetings against the Gators dating back to 2009. The Raiders thrashed Escambia 44-30 in the first round of last year’s playoffs (and could meet again in this year’s post-season).
Senior Jabir Frye is the most recent standout running back at Escambia, which counts Pro Football Hall of Fame member and NFL all-time leading rusher Emmitt Smith and recent Alabama University standout Trent Richardson among its alumni. Frye, a 5-foot-8, 172-pound senior, is a versatile playmaker for the Gators. He’s gained 989 rushing yards and scored eight touchdowns on 96 carries for a phenomenal 10.3 yards-per-carry average. Frye has completed seven of 16 passes for 137 yards and three scores and  caught four passes for 57 yards. Oh, and he averages 26 yards on kickoff returns and 27.7 return yards on punts. He’s scored twice on punt returns and returned an interception 82 yards into an opponent’s end zone. Alabama A&M, Central Arkansas, Florida A&M, Kennesaw State, Prairie View A&M, Southern Mississippi and Utah State already have offered Frye scholarships to play college football 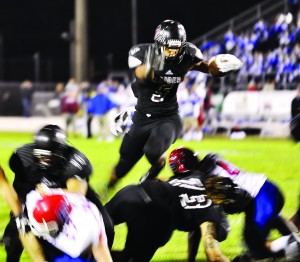 “They do a good job of running the football,” Navarre coach Jay Walls said of Escambia’s option offense. “We’ve got to do a good job defending the run. Offensively, we’ve got to do a good job protecting the football. We can’t make any mistakes and turn it over to them.”
Frye may have flashier statistics, but Navarre’s ground game has been more productive than the Gators’. While Escambia has averaged 249.5 rushing yards per game Navarre’s stable of backs has run for more than 311 yards per contest. Six Raiders have run for more than 100 yards. Senior Hasaan Williams leads the way with 531 yards and four scores on 72 carries (7.4 yards per carry). Junior Michael Carter racked up 526 yards and eight scores on just 46 carries (11.4) before a knee injury ended his season in the season’s third game. Junior Aaron Mitchell has gained 252 yards and scored six touchdowns on 28 carries (9.0) and junior Caine Adamson, half of Navarre’s quarterback tandem with sophomore Sage Chambers, has pitched in 226 yards and a touchdown on 33 carries (6.8).
The Raiders average more than twice as many passing yards as the Gators, 94.3 to 46.7 per game, thanks primarily to Chambers. The Navarre passer has completed 71 percent (33 of 46) of his passes for 426 yards and four touchdowns with two interceptions. Adamson is 13-for-28 for 140 yards and six scores. He’s thrown three picks.
Octy Moyer has 11 catches for 136 yards and three touchdowns and Jordan Ewing has eight catches for 46 yards. Michael Sandle has caught five passes covering 109 yards.
Linebackers Xavier Hernandez (a team-high 33 total tackles and seven sacks) Bo Hering and Aaron Mitchell (30 tackles each) and lineman Anthony Mitchell (21 tackles, 5 sacks) lead the Maroon and Black defense.
NHS will crown its homecoming queen and king at halftime. 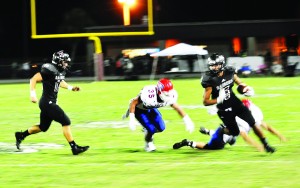