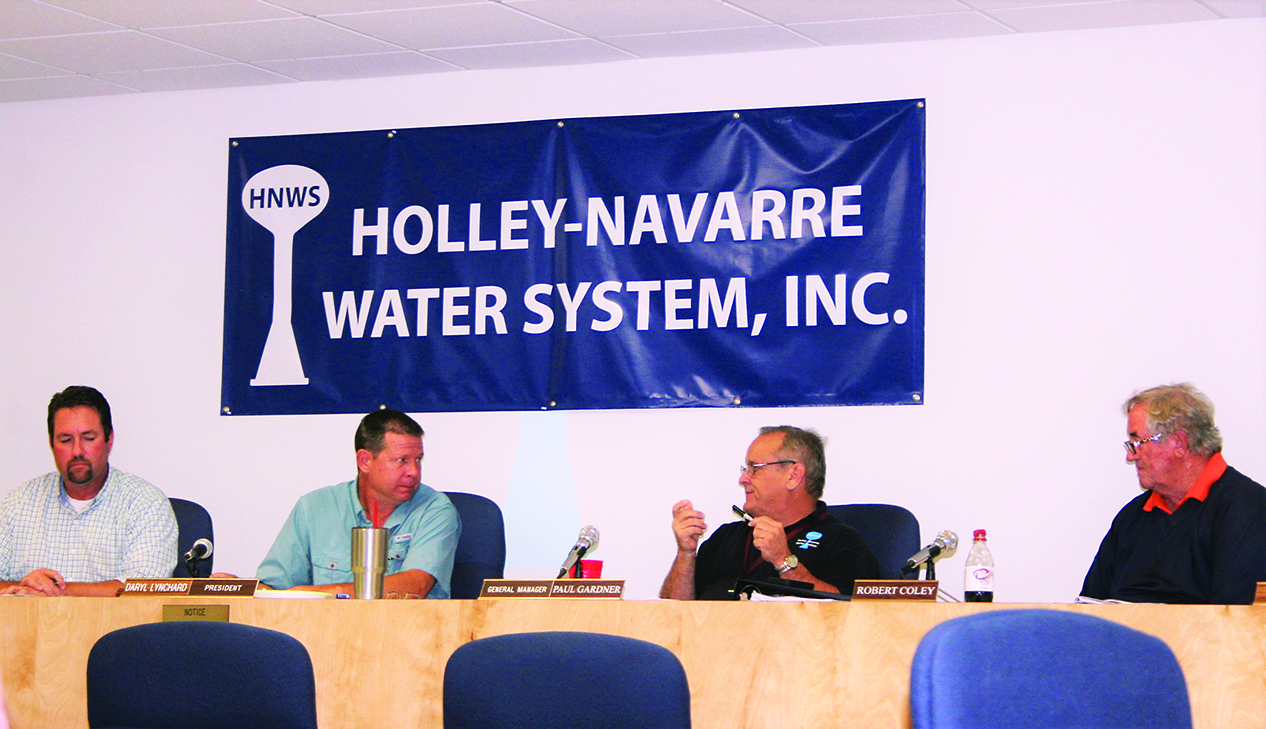 Despite a Nov. 9 press release stating increased water supply costs would likely be passed along to customers, no rate hike was made at the Holley-Navarre Water System’s Nov. 17 board meeting.
Instead HNWS president Daryl Lynchard scheduled a Dec. 8 workshop to further discuss the matter.
Lynchard explained he had directed staff to compile a master plan with detailed expense and revenue projections which the board can use during the decision-making process.
“At some point in the future we’re going to raise rates,” Lynchard said, pointing out it would “probably not” happen before 2016. He also said it would not be a 25 percent increase. 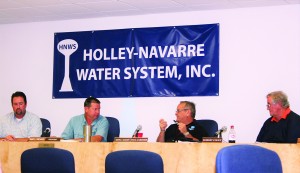 Executive Director Billy Sublett, in the HNWS Nov. 9 press release, had stated the utility’s wholesale supplier of water, Fairpoint Regional Utility System, had increased the price of water by 25 percent in May 2015, following the repair of an underwater distribution line.
HNWS General Manager Paul Gardner explained Tuesday that the cost to repair the break in the line under East Bay was $625,000 and, together with construction of a new water supply well, ground storage tank and booster pump station, accounted for the FRUS increase.
Gardner also told the board HNWS experienced a net loss of roughly $26,000 in October after expending costs for regular maintenance and operation. “I hate to have to spend that money…but the system is in bad shape. The infrastructure is old,” he said.
Lynchard said the utility is also facing increased costs associated with a mandate to provide Affordable Care Act benefits to its more than 100 employees in the coming year, noting in the past the utility did not meet the 100-employee threshold.
The board workshop will take place at 6 p.m., December 8 at the HNWS board room, located at 8574 Turkey Bluff Road.
Election process under review
Additionally, at the Nov. 17 board meeting, a surprise vote last month to alter HNWS bylaws was overturned after the board’s attorney declared it “invalid.”
During an Oct. 27 meeting around a dozen HNWS members voted to amend the corporation’s bylaws related to proxy and absentee voting. Three attendees at the meeting opposed the motion, following heated debate over whether or not the current election process is prone to vote manipulation.
The amendment was made subject to a 30-day review period.
Attorney Michael Tidwell, who has provided legal counsel for HNWS for about 15 years, stated in a Nov. 9 memo that the vote was invalid because the Oct. 27 meeting was not a regular meeting and only a fraction, not a majority, of HNWS members participated – two requirements for amending the bylaws.
In the memo Tidwell stated the board has “the power to vote to place reasonable restrictions on the use of proxies to insure the integrity of the vote.”
Lynchard said the board can discuss the proxy and absentee voting issue at its upcoming workshop.
Members of the utility interested in becoming a candidate for the board of directors may pick up an application at the HNWS office. Applications are due by 4 p.m. December 15. The election will take place January 19.