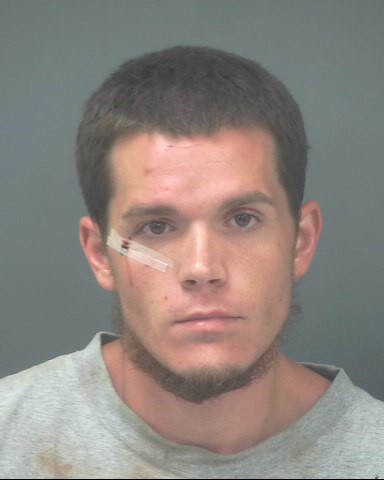 An alleged armed felon tried to escape the grasp of law enforcement Monday afternoon after he stole several items from the Navarre Walmart and led Santa Rosa County Sheriff’s deputies on a foot chase along Highway 98.

The suspect, John Cotner, 26, of Mary Esther was eventually nabbed by deputies and charged with Possession of a Firearm by a Convicted Felon, Carrying a Concealed Weapon, a Misdemeanor Weapon Offense, Trespassing, Petit Theft, Resisting an Officer Without Violence, Drugs Possession and Drug Equipment Possession.

According to the SRSO arrest report, Cotner was spotted inside the Navarre Walmart at around 1:30 p.m. Monday, where Loss Prevention associates noticed the man concealing items inside of a backpack he had on him.

The security cameras caught the “known shoplifter” in the toy department putting items inside of his backpack, according to the arrest report. The suspect allegedly selected a vehicle bicycle rack and then went to the fitness department where he grabbed two items, which he later put in the backpack as well.

The suspect eventually made his way to the front of the store with the bike rack and backpack, later picking out a can of spray paint and paying for it. He later took all of the concealed items and began to walk out of the store where he was stopped by a Loss Prevention employee.

Both the employee and the store’s manager tried to stop Cotner from leaving the store, but he resisted and fled outside on foot. He later attempted to hide the bike rack in a set of bushes in the Walmart parking lot.

The suspect fled east across the parking lot and a SRSO deputy later arrived and caught up with the suspect near a fence on the east side of the Walmart building. The deputy asked the suspect to stop, but Cotner ignored the deputy’s order and jumped over the fence.

It was noted in the arrest report that when Cotner jumped the fence, he dropped his backpack with the stolen items in it, and it was recovered by the deputy.

More deputies were called to the scene and a perimeter was set up around the Walmart on Hwy. 98. Eventually a deputy located Cotner and ordered the man to stop and talk to him, but he refused and the deputy deployed his Taser, which missed the suspect.

Cotner eventually fled over to Navarre United Methodist Church where deputies discovered a .22 caliber wheel gun located near where the suspect had just been. The report indicated that during the investigation, it was determined that the firearm was Cotner’s.  The serial number on the gun was noted as being filed off and unreadable. Deputies eventually caught up with the suspect near Palmetto Ridge Court and apprehended him successfully.

Cotner was later transported back to the Walmart and deputies discovered several needles on the suspect along with drug equipment. Deputies also located a box of .22 caliber ammunition inside the suspect’s backpack and two pieces of a wooden handle that matched the gun the officer found near the Navarrre United Methodist Church.

Brass knuckles were also recovered from the backpack.

Cotner stole approximately $65.49 worth of items, and all of the items were recovered and returned to the store.

The suspect was eventually transported to Santa Rosa County Jail where he was put behind bars on $37,250 bond.