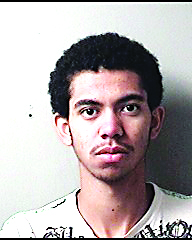 A man who went on a robbing-spree across Santa Rosa and Escambia counties early last year will spend the next 25 years in prison after pleading guilty to his charges out of Santa Rosa County.
Lonnie Locks, 19, was charged with Robbery With a Deadly Weapon, Attempted Robbery With a Deadly Weapon Wearing a Mask and two counts of Aggravated Assault With a Deadly Weapon While Wearing a Mask out of Santa Rosa County.
He plead guilty to the charges last Thursday and was sentenced to 25 years in prison for both those charges and the ones he faced out of Escambia County.
His charges out of Santa Rosa County stem from a robbery that took place on January 21, 2016.
Locks’ arrest report indicated that he entered the Tom Thumb in Navarre located at 2695 Highway 87 South dressed in all black. Upon entering the gas station, he forced the clerk inside the gas station from the back room to the register and demanded the clerk open the register.
Locks was able to get $268 in cash from the register, over $500 worth of cigarettes and the employee’s cell phone.
The next day, Locks entered the Exxon Gas Station located at 8551 Keshar Road in Milton dressed in all black. Upon entering the store, he brandished what appeared to be a firearm.
The suspect then assaulted two people inside of the convenience store after he was unable to locate the gas station clerk and later fled from the store empty handed.
Last Friday, Locks entered a plea of no contest to several other charges stemming from incidents in Escambia County, including Attempted Robbery With a Deadly Weapon, Robbery Without a Weapon, Robbery With a Deadly Weapon and Grand Theft, and Burglary of an Unoccupied Conveyance and Grand Theft.
Locks entered the guilty plea for the Santa Rosa County charges in front of the Honorable Judge John Simon. Simon sentenced the Colorado Springs man shortly after.
Assistant State Attorney Amy Shea prosecuted the case.