Governor Rick Scott this afternoon announced that the Florida Department of Education has released school grades for 2018, and Santa Rosa County Schools earned an “A” for the second consecutive year.

DOE data shows that Santa Rosa County School District since 2010 has received an “A” for every year except 2016.

South Santa Rosa Schools earned the following marks, which are the same as in 2018 (no changes): 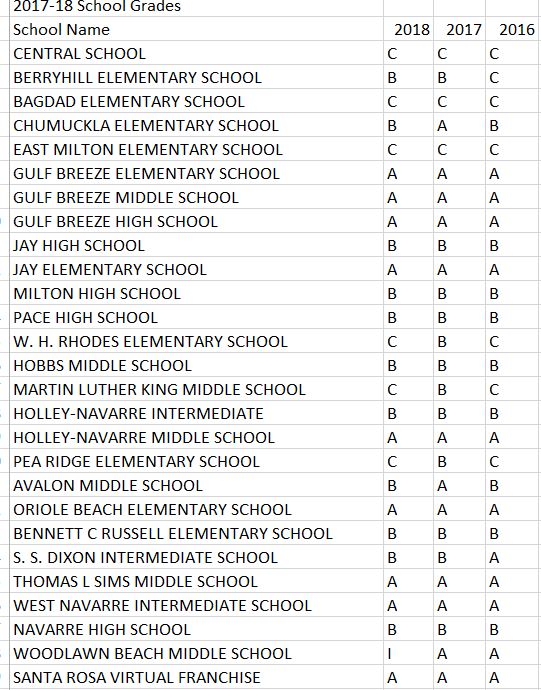 Governor Scott said, “Florida’s schools are continuing to achieve increased success thanks to the hard work of our students and teachers. Our years of historic investment in Florida’s K-12 education system are paying off. The ability to get a great public education empowers ourstudents to live their dreams in Florida. This is why since 2011 funding for Florida’s K-12 public schools has increased by $4.5 billion. I’d like to congratulate Florida’s students and teachers on another year of success.”

Commissioner of Education Pam Stewart said, “The school grades announced today are the result of hard work by our students, parents, teachers and leaders. I am extremely proud that Florida’s accountability system continues to ensure all students have access to the high-quality education they deserve and that it prepares them for college, a career and life.”

The Florida Department of Education calculates school grades annually based on up to 11 components, including student achievement and learning gains on statewide, standardized assessments and high school graduation rate. School grades provide parents and the public an easily understandable way to measure the performance of a school and understand how well each school is serving its students.

In addition to school grades, the department also calculates district grades annually based on the same criteria.