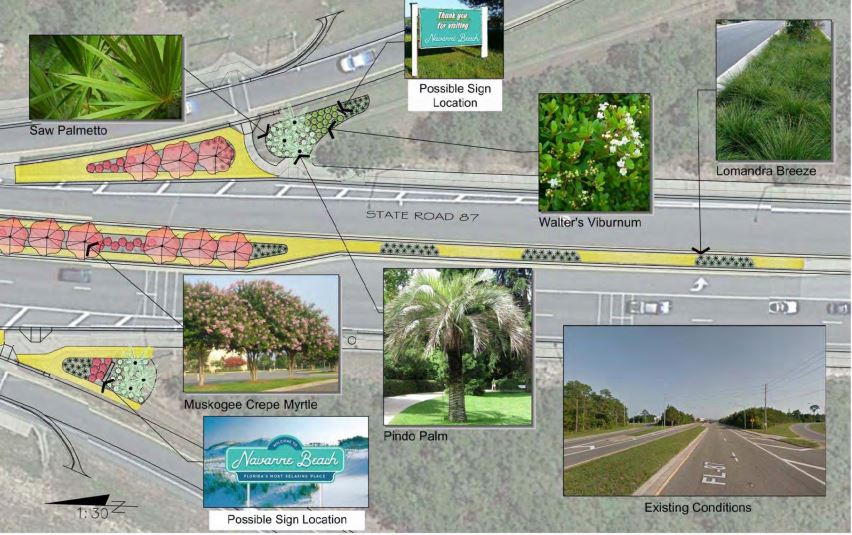 Santa Rosa County Commissioners this morning received a conceptual presentation from an engineering firm tasked with designing a roughly $575,000 landscaping beautification project for the Hwy. 87 S corridor south of Holley. Two new signs and relocation of an existing sign were also proposed as an option for the project.

According to Santa Rosa County Public Information Officer Brandi Whitehurst, tourism development money was approved to fund the design, and Florida Department of Transportation beautification grant money will be used to complete the project in two phases.

Representatives from David H. Melvin, Inc. told commissioners they could work with the county’s marketing agency on the design of the signs, which would match recently installed welcome signage in Navarre, then permit the signage through the Florida Department of Transportation.

The existing welcome sign on the west side of Hwy. 87 S at East River Bridge is proposed to be moved to a better location within the adjacent FDOT right of way.

Commission Chairman Rob Williamson said that sign is currently not in an “optimum” location and that relocation would be an improvement.

One of the two proposed new signs would be placed in FDOT right of way near the intersection with U.S. 98, welcoming visitors to the area. The other new sign would be placed on the northbound ramp off U.S. 98 heading toward Hwy. 87 S, thanking visitors for coming to Navarre.

Drought-resistant plants were incorporated into the design, which features colorful plants such as purple pixie and perennial peanut, which was selected because it is a flowering ground cover which will “choke out” weeds. Other plants suggested for incorporation include Muskogee crepe myrtle and saw palmetto.

The proposed design also includes about 20 Pindo Palms, which cannot go into medians but will be used in FDOT right of ways.

Additionally, Williamson said the county is working with Holley-Navarre Water System to determine if it is possible to reuse treated water for irrigation instead of a well. “It takes up a considerable chunk of the money to provide for (the well),” he said.

The engineering firm is scheduled to present their final plan to commissioners December 6. The project is expected to be completed in September 2018.