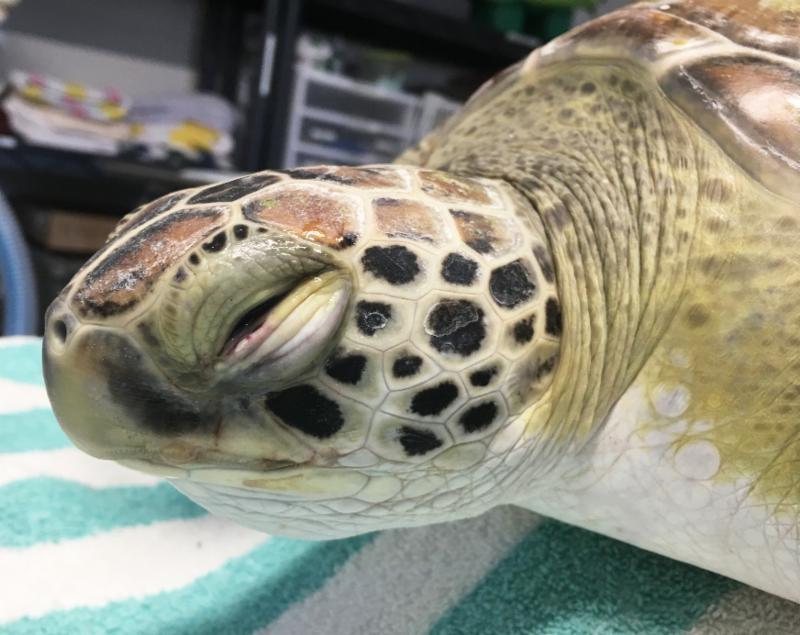 Lefty, a rehabilitated sea turtle at the Gulfarium C.A.R.E. Center, received treatment after being hooked in the eye at Navarre Beach Fishing Pier.
The Gulfarium’s C.A.R.E. Center will be releasing six rehabilitated sea turtles on Tuesday, June 19, 2018 at 9am. The press and public are invited to attend the occasion. Tuesday’s release will be held at Park West off of Fort Pickens Rd in Pensacola. Visitors are encouraged to park in the large parking lot at Park West, and the release will be held on the far west end of the park.
The sea turtles scheduled for release are all juvenile Greens. They were hooked at Navarre Beach Fishing Pier, and luckily did not require surgery. Pinny, Orchid, Heather, Vera, Aloe, and Lefty arrived at the C.A.R.E. Center between June 2nd and June 11th. All six sea turtles were rehabilitated at the Gulfarium C.A.R.E Center and are cleared for release.
“We have already rehabilitated more post-hatchling to adult sea turtles this year than the entire year of 2017, and the season just started,” says Graham Northup, Curator of Fish and Reptiles.”
The Gulfarium CARE Foundation, a 501(c)(3) non-profit, is proud to act as a beacon for coastal conservation through marine animal rescue and rehabilitation. Donations are tax-deductible and can be made online on the C.A.R.E. Center’s page.