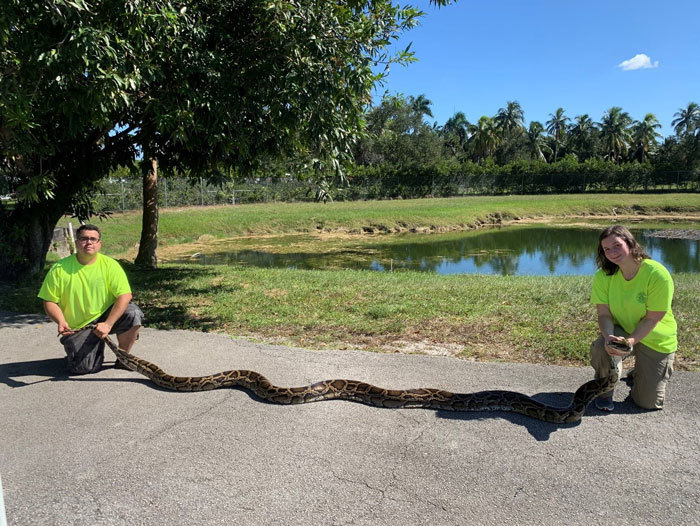 The Florida Fish and Wildlife Conservation Commission (FWC) Python Action Team has now removed 900 Burmese pythons from the wild in Florida, including a large 18 foot, 4 inch long female python – the largest ever captured by the team.

FWC PAT members Cynthia Downer and Jonathan Lopez captured the large adult female python weighing 98 pounds, 10 ounces, on Sept. 22 at Big Cypress National Preserve. In addition to being the largest snake ever captured by the PAT team, it is also the largest ever captured in Big Cypress. The snake is also the second-largest python ever caught in the wild in Florida, only 4 inches shorter than the longest wild python ever captured in Florida. Capturing large adult females is critical because it prevents them from potentially adding an average of 30 to 60 hatchlings to the population each time they breed.

The 900th python captured by the FWC’s Python Action Team was caught by Bobby Monroe on Sept. 24 in the Everglades and Francis S. Taylor Wildlife Management Area in Miami-Dade County. This python was just over 2 feet, weighing just a quarter of a pound.

“Removing 900 pythons is a great milestone for our Python Action Team! These snakes coupled with the thousands removed by our partners at the National Park Service and the South Florida Water Management District make a significant impact to protect Florida’s native wildlife,” said FWC Executive Director Eric Sutton. “With leadership from Governor Ron DeSantis, we are committed to working with our partners including the South Florida Water Management District and the National Park Service to accomplish our goal of removing pythons from our beautiful state.”

“No one agency can shoulder the responsibility to remove this invasive snake alone,” said Superintendent Pedro Ramos, who oversees Big Cypress National Preserve as well as the other National Park Service sites in south Florida. “We’re grateful to our partners from FWC and the South Florida Water Management District and look forward to continuing to work with them on Governor DeSantis’ initiative to expand python removal.”

The FWC created and designed the Python Action Team to further engage qualified individuals with python control efforts. Team members are paid for their efforts to survey for and capture Burmese pythons in specific areas throughout many public lands in south Florida. Team members have removed over 900 invasive constrictors from the wild.

The public can help the FWC control nonnative invasive wildlife by reporting sightings to the FWC’s Exotic Species Hotline at 888-IveGot1 (888-483-4681), online at IveGot1.org or by using the free smartphone app IVEGOT1. If possible, take a picture and note the exact location of the sighting. Python Action Team members often respond to reports of large constrictors and other priority species to attempt to capture and remove these animals from the wild.

Burmese pythons became established in Florida as a result of escaped or released pets. It is illegal to release nonnative species into the wild, doing so can negatively impact native wildlife and habitat. Don’t let it loose! The FWC’s Exotic Pet Amnesty Program allows pet owners to surrender nonnative or exotic pets without penalty. Visit MyFWC.com/PetAmnesty for more information.