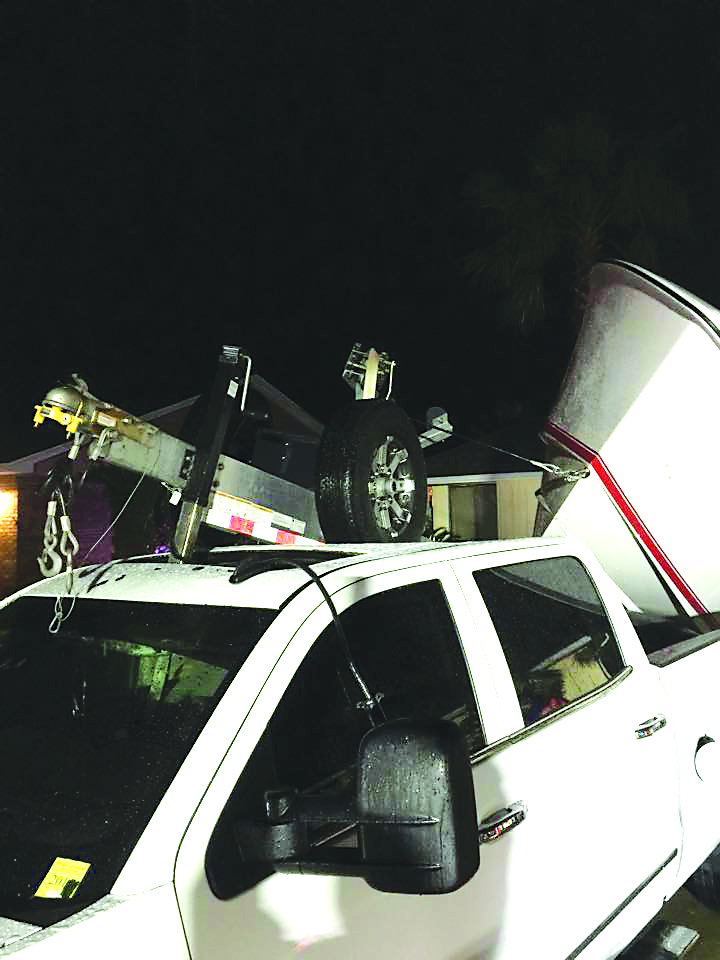 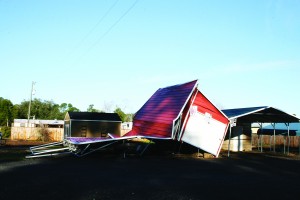 The storm damaged a storage shed at The Feed Bucket off of Hwy. 87S. Damage to homes were reported all across the south end of the county. (Photo by Romi White | South Santa Rosa News)

According to Cody Lindsey, a meteorologist with the National Weather Service in Mobile, Ala., damage from Monday’s storms in the south end of Santa Rosa County was a result of straight-line winds, not a tornado.
“That’s what we believe,” he said, pointing out a meteorologist surveyed the damage from Pensacola to Navarre and used radar signature information to make the determination.
However, Lindsey noted the winds were “pretty significant” and likely in excess of 70 mph.
Tuesday morning several local business owners and residents were helping pick up pieces from the storm the night before. Several residents banned together to help recover parts of a roof, which had been ripped away from Surfside Mini-Storage on Hwy. 87 South during the freak storm that ravaged the area the night of Feb. 15.
During the storm, several businesses in the area reported damage on their property and thousands of residents lost power across Escambia and Santa Rosa counties.
Approximately 21,000 homes in that areas suffered power outages during the storm and crews from surrounding states rushed into the area to assist Gulf Power with the outages. Because of the severity of the damage caused by the storms, additional crews from sister companies Alabama Power, Mississippi Power and Georgia Power were called in to assist with the restoration process.
By noon on Tuesday, only 700 residents remained without power as Gulf Power focused their efforts on Northern Escambia County, which was hit the strongest during the storm.
“Our priority right now is in Century,” said Gulf Power spokesman Jeff Rogers. “Heavy winds destroyed more than 40 poles. New poles have arrived and Chipley crews have joined Pensacola crews to restore power and hope to this city.”
The National Weather Service issued tornado warnings for Mississippi, Alabama and Florida prior to the storm ripping through the area.
Despite reports of funnels forming in parts of Northwest Florida, the extent of the damage across the bi-county area was caused from straight-line winds, and not tornadoes.
All across the south end of Santa Rosa County, storm damage was reported by residents and business owners. 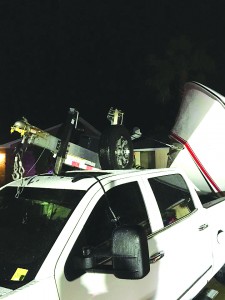 This boat in Santa Rosa Shores went airborne and landed on top of a pickup truck during the storm. (Submitted Photo)

Navarre resident Sara Stamm said the trampoline in her backyard blew away during the storm.
“I’ve looked everywhere, it’s just…gone,” she said. “Broke my fence on its way out.”
There were several houses with roof damage reported in Santa Rosa Shores and a 40 foot Contender boat was picked from the winds and dropped on a truck in the same area.
Midway Fire District did not report any injuries in the Midway area following the storm.
Groups rallied on Facebook to help victims of the storm Tuesday morning.
A Flomaton (Ala.) outreach group was one of the first to step up Tuesday to help collect clothes, food and household items. which are expected to be dispersed to storm victims within the coming weeks.
The group, called “Reimagine Flomaton”, is hosting the “reverse yard sale” and is asking locals to bring anything they can to help the storm victims across Northwest Florida to the Centennial Bank in Navarre tomorrow from 7 a.m. to 10 p.m.
The group is asking for any donations including: clothes, school supplies, household items and canned food.
They will drop off the items at Reimagine Flomaton following collection.
Centennial Bank is located at 8524, Navarre Parkway, close to the Hwy. 87S intersection.