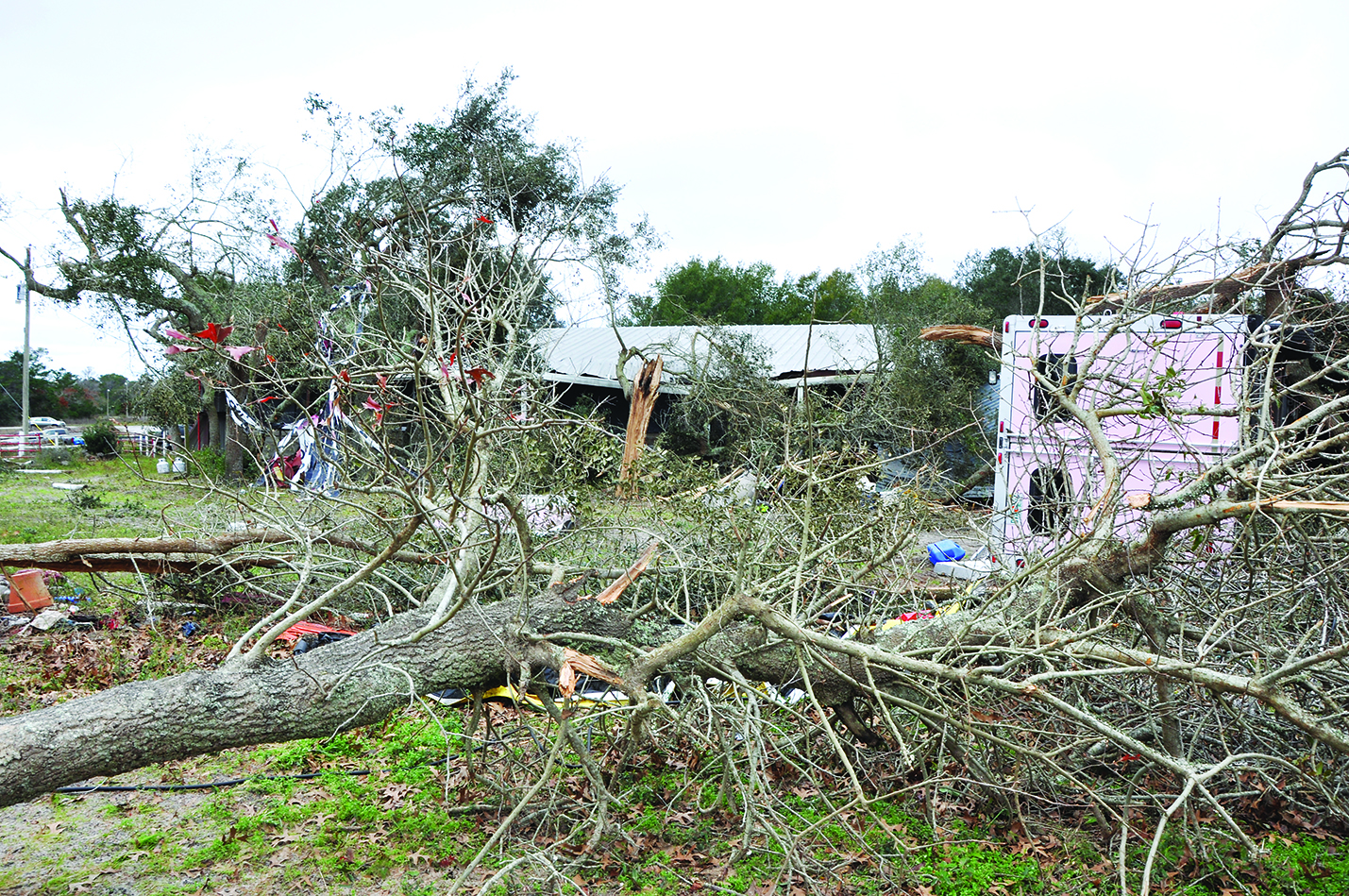 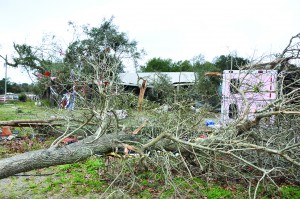 The storm tore through a ranch in Midway, damaging several buildings, equipment and a horse trailer. (Photo by Mat Pellegrino | SSRN)

A Gulf Breeze ranch owner was one of many people affected by the storm that ripped through the area last Friday morning. The storm brought with it heavy straight-line winds that caused tornado-like damage through one Midway neighborhood at around 1 a.m. that morning.
Beaver Pond Ranch owner, Sunny Bolton, awoke early that morning to the sounds of tree limbs breaking and loud lightning strikes. Her farm, located off of Beechwood Drive in Midway, was caught in the middle of strong straight-line winds from the storm that tipped over the farm’s horse trailer, snapped trees in half, ripped down fences and nearly injured one of the horses on the farm.
After assessing the damage from the storm, the ranch owner called in family members and friends to help recover from the catastrophe.
About half a dozen people turned up to help pick up from the storm and to erect the fence Friday morning that had been torn down from what appeared to be a tornado, in an effort to keep the horses off of U.S. Highway 98.
“There was a lot of wind and thunder and lightning…but I had no idea what was going on,” said Kim Gilmore, who was helping put up the fence that morning.
Another helper, Kelly Frost, who doesn’t live on the property, said she was called in to help pick up after the storm along with the ranch owner’s son Kyle Register.
“I got the call at about 2:30 a.m. I drove about three hours to get out here to help,” said Register, who drove all the way from Alabama to help clean up from the storm.
A tornado watch went into effect for Santa Rosa County at around 6 p.m. last Thursday and stayed in effect until 3 a.m. Friday morning.

The watch also affected areas of southeast Mississippi and southwest Alabama.
The farm owner originally thought a tornado had caused the damage to the ranch.
According to Joe Maniscalco, a meteorologist at the National Weather Service station in Mobile, Ala., although the residents felt like the storm damage in Midway was linked to a tornado, it was actually straight-line winds that caused the nearly 100-ft. path of destruction, according to NWS reports.
“At this time, the information we have gathered and looking back at the data, it appears to us that it was straight-line wind damage. We verified that with most other people we talked to in Santa Rosa,” Maniscalco said.
Multiple damage was reported all over Santa Rosa County, along with a lightning strike that hit a home in Tiger Point, the meteorologist said.
“We had 4 reports of storm data from Santa Rosa in our storm reports. We had a 58 mph wind gust reported by one of our systems at Whiting Field in Milton,” Maniscalco said. “Four miles northeast of Bagdad, there was damage to an equestrian center and an out building off of Bobby Brown Road.”