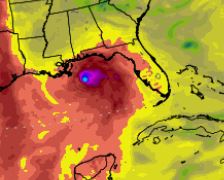 Graphic by Weathermodels.com for September 4

“Gradual strengthening is forecast during the next 36 hours, and Gordon is expected to be a hurricane when it makes landfall along the north-central Gulf Coast,” stated NHC Forecaster Dan Brown in the advisory.

The storm is now roughly 385 miles ESE of the mouth of the Mississippi River headed WNW at 17 mph per NHC.

The following watches/warnings are in effect:

A Storm Surge Warning is in effect for…

A Storm Surge Watch is in effect for…

A Hurricane Warning is in effect for…

A Tropical Storm Warning is in effect for…

A Storm Surge Warning means there is a danger of life-threatening inundation, from rising water moving inland from the coastline, in the indicated locations. For a depiction of areas at risk, please see the National Weather Service Storm Surge Watch/Warning Graphic, available at hurricanes.gov. This is a life-threatening situation. Persons located within these areas should take all necessary actions to protect life and property from rising water and the potential for other dangerous conditions. Promptly follow evacuation and other instructions from local officials.

A Storm Surge Watch means there is a possibility of life- threatening inundation, from rising water moving inland from the coastline, in the indicated locations.

A Hurricane Warning means that hurricane conditions are expected somewhere within the warning area. Preparations to protect life and property should be rushed to completion.