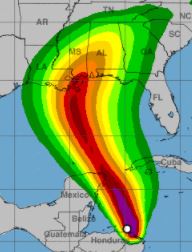 “This general track with a marked increase in forward speed is expected during the next day or two. On the forecast track, the center of Nate will move across the northwestern Caribbean Sea today, and reach the eastern coast of the Yucatan peninsula early this evening. Nate will then move into the southern Gulf of Mexico tonight and approach the northern Gulf coast Saturday evening,” stated the advisory.

According to NHC, strengthening is forecast during the next couple of days. “Nate is expected to become a hurricane by the time it reaches the northern Gulf of Mexico.”

“Nate is forecast to reach the northern Gulf Coast late Saturday or Sunday morning as a hurricane, and the threat of direct impacts from wind, storm surge, and heavy rainfall is increasing from Louisiana through the western Florida Panhandle. Hurricane and tropical storm watches, as well as a storm surge watch, are in effect for a portion of the northern Gulf Coast, and residents in these areas should monitor the progress of Nate, heeding any advice given by local officials,” NHC Forecaster Lixion Avila stated.

Tropical-storm-force winds extend outward up to 90 miles mainly to the east of the center.