Three Fort Walton Beach teens are facing numerous charges after they attempted to break into several homes in Navarre, prompting a high speed chase, which forced soft lockdowns of three area schools.
The teenagers, later identified as Donald Fuggerson, 16, Isiah Soto, 15, and Tyrell Marshall, 15, were seen breaking into a home on Commodore Street and Chablis Circle early Tuesday morning.
Two of the teens were spotted walking into a garage on Commodore Street at around 7 a.m. that day and stealing items from vehicles parked inside of the garage. The teens later fled from the scene in a white Cadillac that was reported stolen out of Okaloosa County.
One of the burglary victims who lives at the Commodore Street resident was able to give 9-1-1 operators a description of the vehicle and the young male driver.
Santa Rosa County Sheriff’s deputies later spotted the stolen vehicle and attempted to stop it. That’s when the suspects fled from police, driving erratically through a school zone. They were able to escape the patrol vehicle that was pursuing them.
During the pursuit Holley Navarre Primary, Intermediate and Middle schools were put on a soft lockdown for precaution.
The suspects were later spotted by a Navarre resident near a home on Chablis Circle after they evaded deputies during the pursuit, and police were called in to apprehend the suspects.
All three of the males eventually fled towards the neighboring apartment complex Cayo Grande Apartments when officers arrived. A Gulf Breeze Police K-9 was dispatched to the location and all three suspects were eventually apprehended.
Soto and Fuggerson were detained at the apartment complex, while Marshall was spotted and apprehended as he was walking near Hwy. 98.
Officers were forced to Taser Marshall after he was spotted with a stolen 9mm handgun. He did not fire the weapon at deputies. 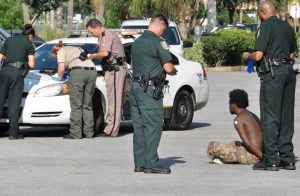 All three suspects were charged with burglary, larceny grand theft and obstructing police. All three of the teenagers were also slapped with felony probation violations.
Marshall was additionally charged with possession of a weapon with a felony.