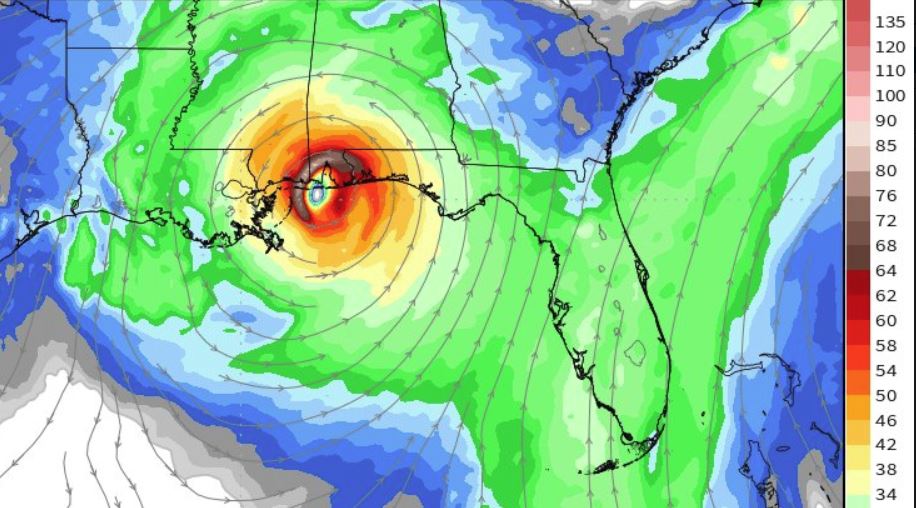 Graphic depicting predicted winds for Tuesday, May 29 by weathermodels.com

The National Hurricane Center’s latest advisory indicates heavy rainfall and “hazardous” surf from Subtropical Storm Alberto is expected to affect the northeastern Gulf Coast through the weekend, and Tropical Storm and Storm Surge Watches could be issued today.

“Interests along the central and eastern U.S. Gulf Coast should monitor the progress of Alberto. Tropical storm and storm surge watches could be required for portions of this area later today or tonight,” stated NHC Forecaster Stacy Stewart.

According to the NHC’s 1 p.m. CDT update, heavy rain will likely begin to affect the central Gulf Coast region later this weekend and continue into early next week. “Flooding potential will increase across this region early next week as Alberto is forecast to slow down after it moves inland,” said Stewart.

Additionally NHC reports that “hazardous” surf conditions are forecast to develop along much of the central and eastern U.S. Gulf Coast this weekend.

Currently Alberto is about 60 miles south of Cozumel, Mexico and stationary with maximum sustained winds of 40 mph and higher gusts. Winds of 40 mph extend roughly 115 miles from the center of circulation, per NHC.

The NHC update states “gradual strengthening” over the next 72 hours is expected.

However, there is some uncertainty in the near-landfall intensity of Alberto on Monday, according to Meteorologist Dr. Ryan Maue, chief operating officer of weather.us, who pointed out that the European and other weather models indicate a fully-tropical system near (or at) Category 1 hurricane strength.

“Prepare for wind, surge, and heavy rain. Gulf of Mexico beaches will be hazardous,” Maue said.

The National Weather Service in Mobile reports that strong rip currents are being reported at some  local beaches today, and a high risk of rip currents continues through (at least) the early part of next week.

A high risk of rip currents means the surf is dangerous for all levels of swimmers, per NWS.

Fureigh said when the surf reaches a height of three feet that double red flags will be flown, indicating beaches are closed to those who are not tethered to a surf board or a flotation device which can support their weight. Fureigh doesn’t expect to close the beaches until later this weekend, possibly Sunday.

The next NHC advisory for Alberto will be issued by 4 p.m. CDT.