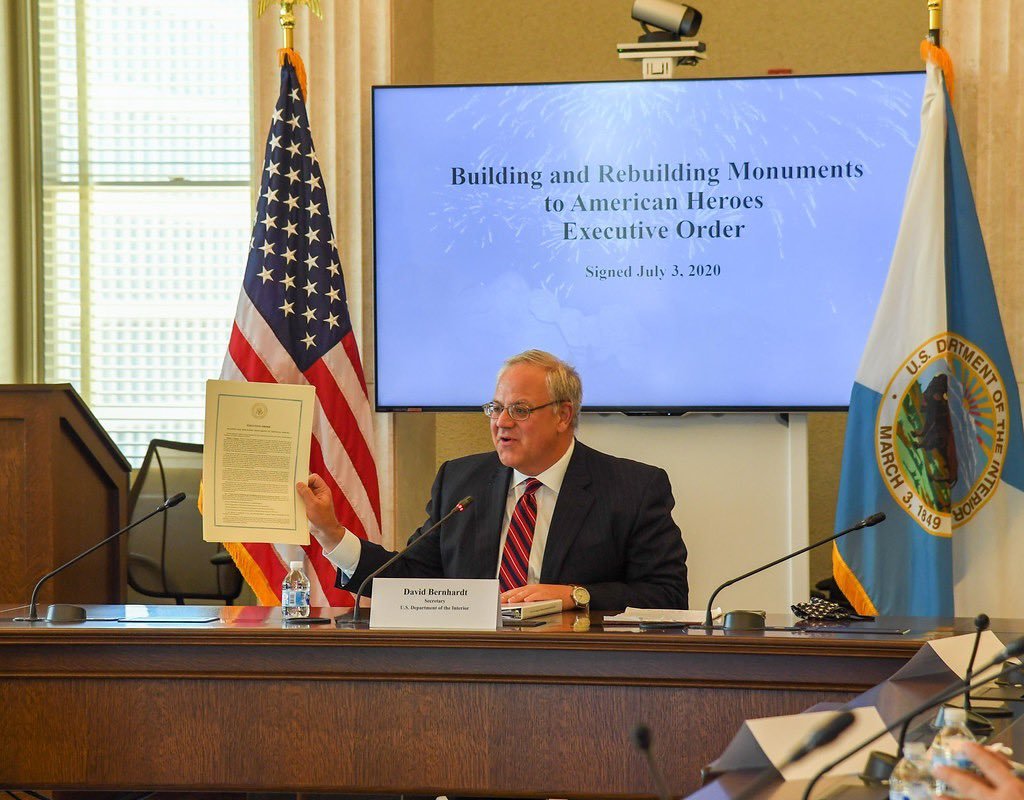 Photo: Secretary Bernhardt at the inaugural meeting of the Task Force for Building and Rebuilding Monuments to American Heroes. Photo Credit: Department of the Interior Photographer.

The Trump Administration yesterday hosted the first meeting of the Task Force for Building and Rebuilding Monuments to American Heroes (Task Force) at the United States Department of the Interior chaired by U.S. Secretary of the Interior David L. Bernhardt.

“President Trump took bold action by signing the Executive Order on Building and Rebuilding Monuments to American Heroes to remind us of the exceptional individuals in our history who produced the greatest country in the world,” said Secretary Bernhardt. “The President recognizes that statues are silent teachers in the form of stone and metal. Yesterday’s inaugural Task Force meeting following the direction of the President was a great kickoff to an exciting undertaking that will recognize our greatest citizens and protect our history for the benefit of all Americans.”

“GSA is honored to participate in the Task Force for Building and Rebuilding Monuments to American Heroes,” said Administrator of the U.S. General Services Administration Emily Murphy. “Yesterday’s meeting was an important first step as we reinvigorate the essential role art has in civic architecture, expressing the values and identity of our Nation.”

“On behalf of my NEH colleagues, I am honored to serve on President Trump’s historic task force to celebrate the men and women of all races and backgrounds who sacrificed so much to create and sustain our Republic,” said Jon Parrish Peede, Chairman of the National Endowment of the Humanities. “The United States is, in the words of Lincoln, ‘the last best hope of earth.’ By linking new and existing statues of American heroes with interpretive educational resources, this task force will provide our fellow citizens with the historical knowledge necessary to live up to the founding ideals of the world’s oldest representative democracy.”

“The ACHP is delighted to be part of this Task Force,” said Chairman of the Advisory Council on Historic Preservation Aimee Jorjani. “Proper discussions over commemorative works offers opportunities to increase public participation and understanding of American history – including complexities of more difficult aspects – and will pay dividends for local decision makers in exploring alternatives. Likewise, America has so much to be inspired by. It is important for all to see that progress; not erase it.”

The EO directs the Task Force to submit a report to the President that proposes options for the creation of the National Garden, including potential locations for the site, within 60 days of the order.