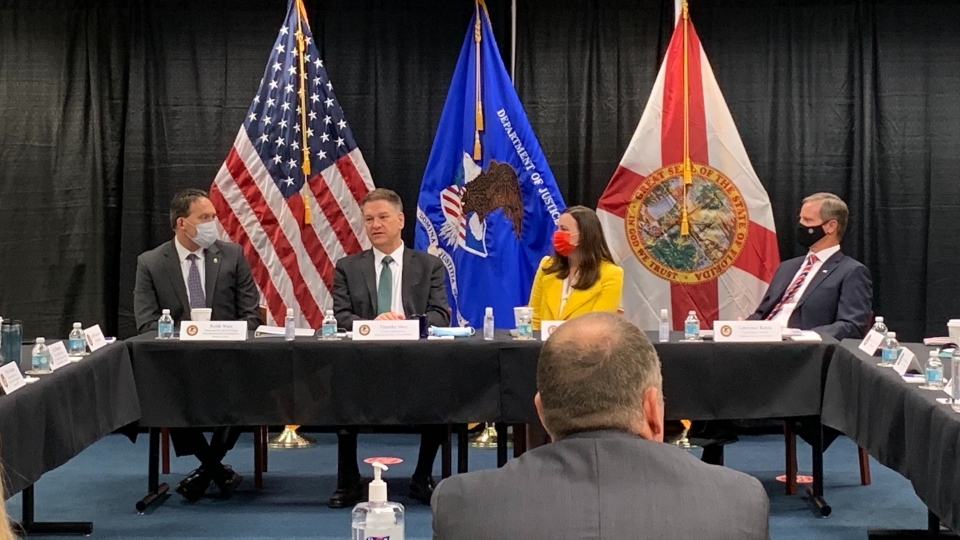 Seeking to build on the success of a multi-agency effort to stanch the distribution of methamphetamine and related violent crime in Franklin County, Florida, United States Attorney Lawrence Keefe of the Northern District of Florida hosted Timothy Shea, Acting Administrator of the Drug Enforcement Agency (DEA), for an October 7 law enforcement roundtable discussion with sheriffs from throughout the District to identify additional partnership opportunities. The Honorable Ashley Moody, Florida Attorney General, and Keith Weis, Acting Special Agent in Charge of DEA’s Miami Division, also participated in the event.

“The United States Attorney’s Office was honored to host Acting Administrator Shea for a substantive discussion with sheriffs from throughout the Northern District of Florida,” said U.S. Attorney Keefe. “He rolled up his sleeves, along with Florida Attorney General Ashley Moody, and got into trenches with these sheriffs who were elected by the people of their counties. Together, we worked to create new strategies in our ongoing effort to disrupt the distribution of methamphetamine and related violent crime in Northern Florida, using our recent success in Franklin County as a model.”

The closed roundtable focused on the impact of Mexican Transnational Criminal Organizations in the Northern Florida.  Dialogue between Sheriffs from Franklin, Bay, Taylor, Calhoun, Lafayette, Jefferson, Gilchrist and Leon Counties and DEA leadership focused on intelligence sharing and identifying further opportunities for local, state, and federal law enforcement to work together to reduce meth trafficking, use, and associated violent crime. Officials from the Florida Sheriff’s Association, leaders from the Federal Bureau of Investigation’s Jacksonville Division and the U.S. Marshal Service’s Northern District and State Attorney Jack Campbell of Florida’s Second Judicial Circuit participated in the talks.

Following the closed roundtable, U.S. Attorney Keefe, A.J. “Tony” Smith, Sheriff of Franklin County, and DEA Acting Administrator Shea spoke to the media.   Sheriff Smith spoke about the significant impact that the support of the DEA has made in reducing the trafficking, sale, and use of methamphetamine in Franklin County. DEA Acting Administrator Shea then shared information about nation-wide DEA efforts to combat methamphetamine trafficking and emphasized the importance of partnerships with state and local law enforcement.

“Those who say drug trafficking is not a violent crime couldn’t be more wrong,” said Acting Administrator Shea. “Drug trafficking affects the safety and security of all of us. The criminals who engage in drug trafficking fuel the epidemic of addiction in our country – and profit from it – while feeding the violence that it plaguing so many communities.”

U.S. Attorney Keefe concluded the press conference by discussing the topics and outcomes of the closed law enforcement roundtable.