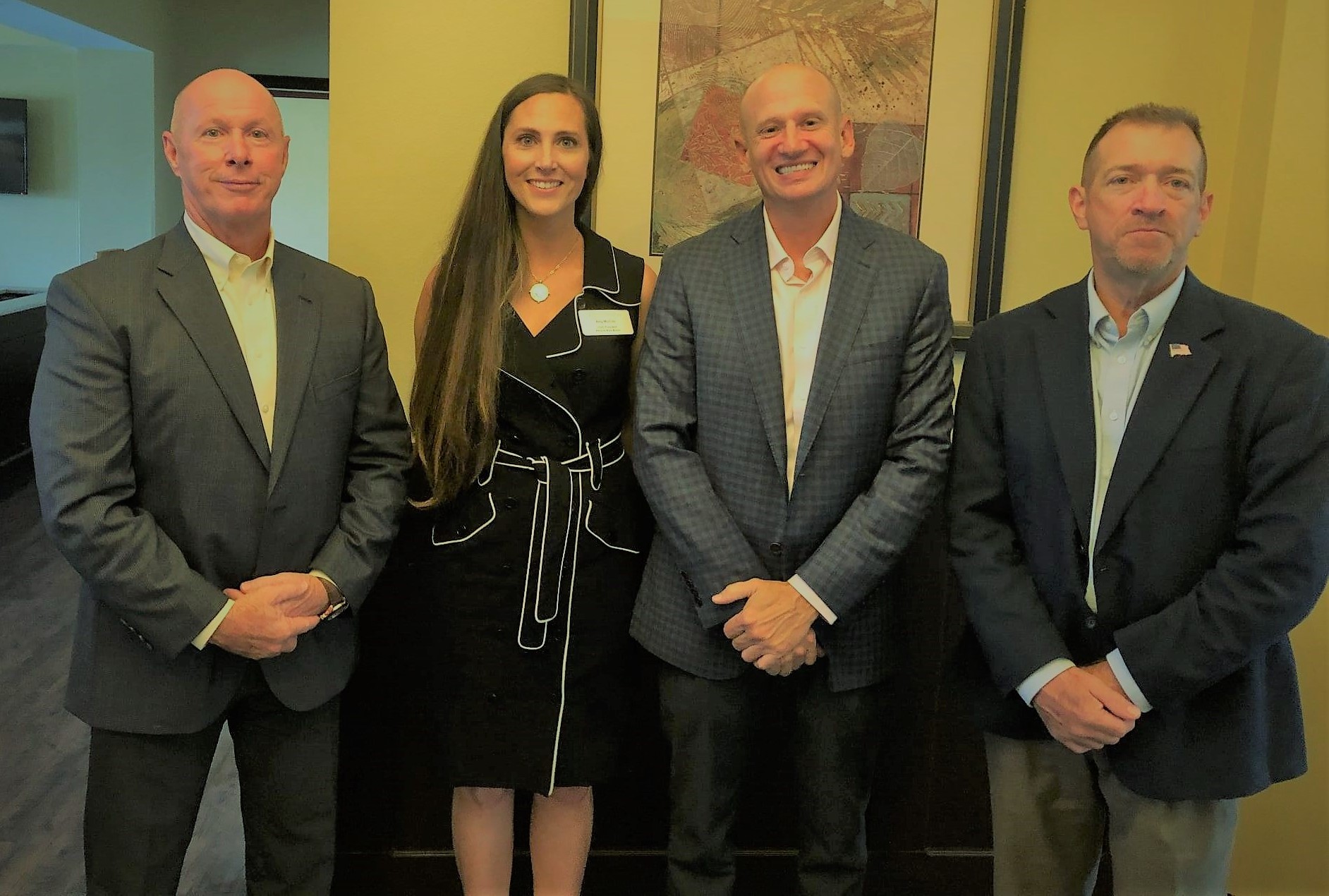 Holley-Navarre Water System CEO Dr. Dallas Peavey Jr., left, pictured with Navarre Area Board of Realtors President Amy Mullins, HNWS President Mike Kennedy and HNWS Board Member Joe Campbell during the July 14 NABOR monthly luncheon at The Club at Hidden Creek, which is owned by the utility. Peavey was guest speaker at the sold-out event.

Dr. Dallas Peavey Jr. was hired in December 2020 as CEO of Holley-Navarre Water System to turn things around for the beleaguered utility, and he seems to be doing just that.

For the past few years, the utility’s board of directors has been hit with heavy criticism over decisions, such as establishing a costly pension plan and hiring former Santa Rosa County District 4 Commissioner Rob Williamson, who was ultimately ousted as CEO after members argued he didn’t have the experience necessary to do the job.

But with Peavey, it would be hard, if not impossible, to argue he doesn’t have the right experience, considering he has spent more than 42 years in the utilities industry and served as a senior executive for a $1.2 billion international utility company and joint venture group with more than 3,500 employees.

Peavey, a tough, business-minded leader armed with a doctorate degree, walked in the door and started making changes to improve how the utility operates and strengthen the balance sheet. He has done so unapologetically, upsetting a few employees and outspoken members but impressing colleagues and state-level leaders with his steely-eyed, forward-moving focus.

Northwest Florida Water Management District Executive Director Brett Cyphers has been working with Peavey on the Eglin Rapid Infiltration Basin System (RIBS) project, one of the largest infrastructure improvements planned for the region.

That project, which is running ahead of schedule, will not only stop the discharge of treated effluent from Navarre Beach into Santa Rosa Sound but also significantly increase the utility’s overall discharge capacity for the future.

“It’s been an absolute pleasure working with Dallas on (the Eglin RIBs) project,” said Cyphers. “He has made the Holley-Navarre Water System staff and facility available on multiple occasions to help move this project forward. We look forward to many productive years to come working with Dallas and the Holley-Navarre Water System.”

According to Peavey, 90 percent of the Eglin RIBS project’s design engineering is complete, and he expects to break ground in November.

The progress under Peavey’s leadership hasn’t been limited to HNWS, which he says has seen year-to-date cost savings of roughly $9 million through actions such as freezing the pension plan.

The utility in 2012 purchased The Club at Hidden Creek for the purpose of having a spray field to discharge treated effluent. Since then The Club had not made a profit. However, for the past three months, it has been generating revenue.

“June was better than ever,” Peavey said, pointing out that 55 people have joined since The Club changed its business strategies, including replacing staff and eliminating free use of the facility for meetings. All groups who use the facility are now required to pay.

Trey Giles, formerly of Tiger Point Golf Course, joined The Club Monday as pro shop manager, and an offer has been accepted by a new Director of Golf, who has yet to be announced, pending background and other screening. Peavey hopes to make that announcement by August 4.

Additionally, Peavey said assertions made on social media that the golf course will no longer be needed for discharging effluent after the Eglin RIBS comes online are “not correct.”

“We didn’t buy a golf course, we bought a spray field. Even with Eglin, we’ve already paid for this, and it is part of our permit capacity,” Peavey said, adding “If something (unforseen) happened, we would have to have redundant capacity.”

Another issue Peavey addressed was allegations that the utility isn’t being transparent enough, noting that all documents the utility is legally required to provide its members are immediately accessible via www.hnws-fl.com.

He also defends closed meetings for The Club and MESI, an engineering company set up in 2015.

“The purpose of Hidden Creek being done at a closed meeting is it is a private company. We have competitors. In the past, Tiger Point (Golf Course) told us they were watching every month and knew who was playing the rounds.”

Peavey said some of the criticism is coming from people with “specific agendas” and that both private companies are audited yearly.

Some of those critics say HNWS board members shouldn’t also be board members of the Holley By The Sea Homeowners Association, calling that a conflict of interest.

“I don’t see an issue with (Holley By The Sea homeowners association members) being on the board,” Peavey said. “There’s no collusion going on.”

Other criticism includes the utility holding on to reserve funds, which have accrued over the past 3-5 years.

“That money is set aside for capital improvements or catastrophic events,” said Peavey, stating it is prudent to have reserves for emergency repairs or infrastructure upgrades, which are needed.

“We have nothing to hide. Members are entitled to information,” he said, suggesting that members who do not like how the utility is being operated should run for the board. “Everybody on the board was elected to represent the members. I’m a business-minded person. Not related to friends and family. Some actions impacted long-term employees. Those actions were reasonable based up on their actions. Everything about this company is now business driven. Not good old boys.”