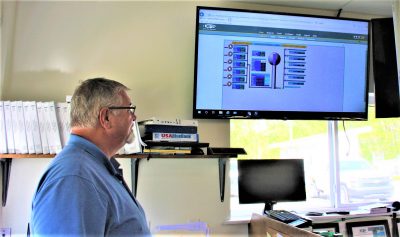 Mark Turner two years ago took over running the electrical department for Holley-Navarre Water System, and he’s being praised for cost-saving innovations developed under his leadership.

Danny Hawkins, who oversees the utility’s sewer department, said system improvements have reduced call outs and overtime, providing not only cost savings to members but also increasing employees’ morale due to a reduction in “middle of the night” calls.

“We can operate a lot of the stations now from our tablets and our phone, and it cuts back on calls for that reason. It also helps us determine the type of equipment we’ll need when an on-site response is required,” Hawkins said.

Real-time valve actuators and redundant system backup are just two of the features of the updated system, which helps maintain steady flow at sites including a rapid infiltration basin located on U.S. 98. “It also extends the life of the equipment,” said Turner.

The innovations not only allow some functions to be controlled remotely at the HNWS Pepper Street facility, where Turner’s office is located, but also allow employees to handle issues which used to require consultants.

“We’re excited that we can allow our talented employees to lead and innovate,” said HNWS CEO Rob Williamson, pointing out it ultimately helps retain good employees and recruit the best people for the jobs while saving members money.

‘I could not have accomplished any of this without the help of our employees,” said Turner.