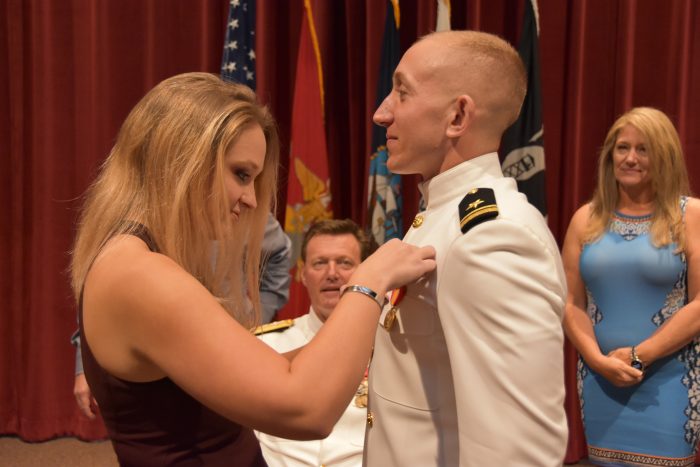 Lt. j.g. Robert Woods, a native of Northlake, Illinois, walked off the stage at the Lassen Auditorium as the Navy’s newest helicopter pilot. He joined 22 other students in achieving the greatly sought after designation.

While he recognizes being the milestone pilot was largely a matter of luck, it is still a hallmark he cherishes, Woods said.

“I feel incredibly honored and lucky to have the distinction of being the 35,000th winger,” Woods said. “We all work extremely hard to earn our Wings of Gold and this milestone is a reminder of all who have gone before us.”

After his wife, Nikki, pinned Woods with his wings, the guest speaker for the ceremony, Commander, Naval Education and Training Command Rear Adm. Kyle Cozad, who hails from Las Vegas, also congratulated him. TRAWING 5 Commodore Capt. Doug Rosa, from Garden City, Michigan, paused the ceremony for a moment present Woods with a plaque to celebrate the milestone event.Exemplifying typical aviator wit, the plaque read: “Through no great effort of your own and by no selection means other than being near the bottom of the alphabet during your winging class, you are hereby selected as the 35,000th rotary wing aviator. Congratulations, this number should be easy to remember.”Although humorous, the plaque relates that the true achievement in reaching this milestone is the 76-plus years of naval helicopter training, of which the last 46 years have been performed at Naval Air Station Whiting Field in Milton.

Woods will go on to fly the MH-60R Sea Hawk helicopter with the Airwolves of Helicopter Maritime Strike Squadron Forty in Jacksonville, Florida.

“Reaching this milestone, the 35,000th helicopter pilot trained right here at Naval Air Station Whiting Field in Milton, Florida, is a great achievement for rotary wing aviation and highlights the important world class training we do every day,” Rosa said. “We are meeting the ever increasing need for Navy, Marine Corps, and Coast Guard helicopter aviators who perform a wide array of warfighting missions: search and rescue, anti-submarine warfare, vertical replenishment, anti-surface warfare, humanitarian and disaster relief, medical evacuation, mine counter measures, and electromagnetic warfare, just to name a few.”

“It’s always inspiring to stand witness to the next generation of naval aviators as they take a critical next step in their careers,” Cozad said. “As the father of a helicopter pilot on deployment today, I know first-hand that the rotary community has a long, proud, and storied history in Naval Aviation. This latest production milestone is a call; a reminder that as these newest aviators prepare to enter the fleet, our Navy is depending on them to join in as an integral part of the carrier air wing, or to conduct expeditionary operations forward. These newest rotary aviators will provide one of a kind capabilities that will help underpin future victory in today’s great power competition.”

TRAWING 5 conducts primary flight training and advanced rotary training at NAS Whiting Field. The wing flew 129,937 hours in fiscal year 2019, which accounts for 46% of all of Chief of Naval Air Training (CNATRA) hours and 15% of all United States Navy flight hours. It is responsible for training 100% of all Navy, Marine Corps, and Coast Guard helicopter pilots and winged 457 rotary wing aviators in fiscal year 19.

TRAWING 5 is awaiting the arrival of a new helicopter trainer in the Advanced Helicopter Training System. The new helicopter will replace the aging TH-57 Bell Jet Ranger, which has been in use at NAS Whiting Field for more than 35 years. A contract award is expected to be announced in fiscal year 2020.

As important as the various helicopter platforms are, they are useless without the pilots who fly them, or the instructors who train the students. TRAWING 5’s core of instructors are all fleet-experienced pilots who bring a wealth of knowledge to the task of molding talented young men and women into warriors.

“I am extremely proud of the Training Air Wing 5 team for their unrelenting drive to accomplish our aviator production mission and send trained and ready rotary wing aviators to the fleet,” Rosa said.