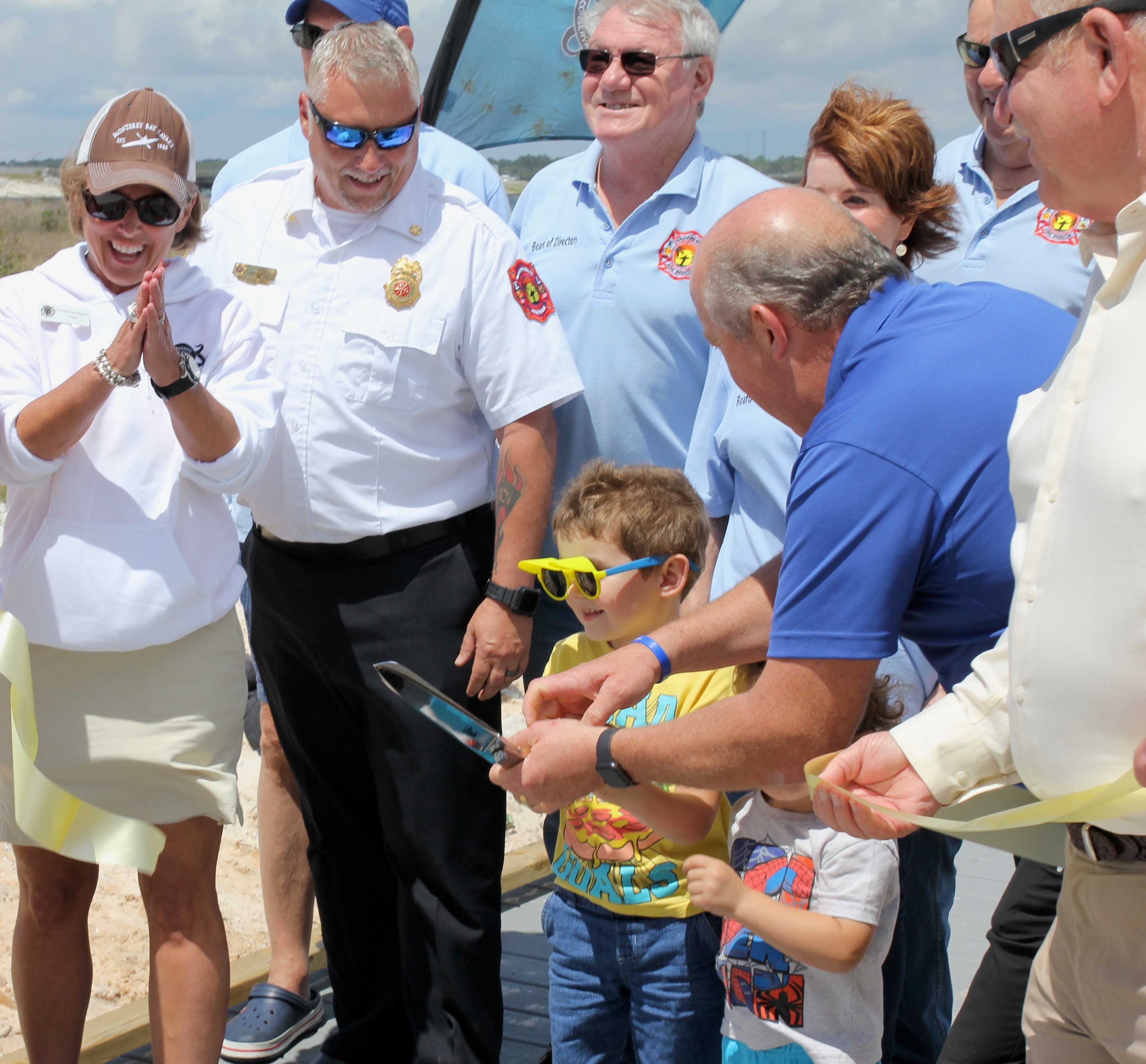 Charlene Mauro, founder of the Navarre Beach Marine Science Station, left, at the April 9 opening of improvements on the Sound side of Navarre Beach Marine Park. Mauro wrote the initial Deepwater Horizon early restoration federal grant application for the improvements, which include ADA-accessible boardwalks and a pier with a kayak launch. She’s pictured with Navarre Beach Fire Rescue officials and others, including Santa Rosa County District 4 Commissioner Dave Piech, shown aiding Kelvin and Kyle Hall during the ribbon-cutting ceremony. City of Milton Councilman George Jordan is pictured far right.

Mauro appeared before the board, seeking to increase funding for the project to $7 million, but instead commissioners unanimously agreed to amend the county’s RESTORE Act multi-year implementation plan to make their top priority water quality and infrastructure projects, including allocating about $7 million toward projects which would stop the discharge of effluent from Navarre Beach wastewater treatment plant into Santa Rosa Sound and from the City of Milton’s waste water treatment plant into Blackwater River.

“The Board of County Commissioners felt that other priorities for (infrastructure) outweigh the Discovery Center at this time,” Mauro said during a presentation Wednesday at the Navarre Area Board of Realtor’s monthly luncheon. “I understand the importance of getting that wastewater treatment off the island.”

The Center is planned to be an eco-tourism destination which will feature marine science and environmental exhibits. A nonprofit organization, Northwest Florida Marine Education and Discovery of Gulf Ecosystems, was created to seek funding and operate the future venue.

The current $10-million design for the center includes a nearly 11,600 facility, 15,000-gallon aquarium, amphitheater and boardwalks, which would be constructed on county-owned property on Navarre Beach located on the Sound side of the island across from Springhill Suites hotel.

“We will continue to strive toward fundraising for matching capital financial support toward construction of the (Gulf Coast Discovery Center),” Mauro said Wednesday.

Mauro and several supporters appeared before commissioners today asking to modify plans for a previously allocated $265,000 RESTORE Pot 1 allotment for the planning and design of the center. To date only $100,000 of that allotment has been expended.

However, board members expressed concern that all deliverables could not be completed with the remaining $165,000 fund balance.

Erica Grancagnolo, who has been coordinating RESTORE funding for the county, on Thursday said the U.S. Treasury Department, which oversees RESTORE Act funding, has indicated that it would be “reasonable” to request that the current deliverables be accepted and the remaining balance be reapportioned toward another local project.