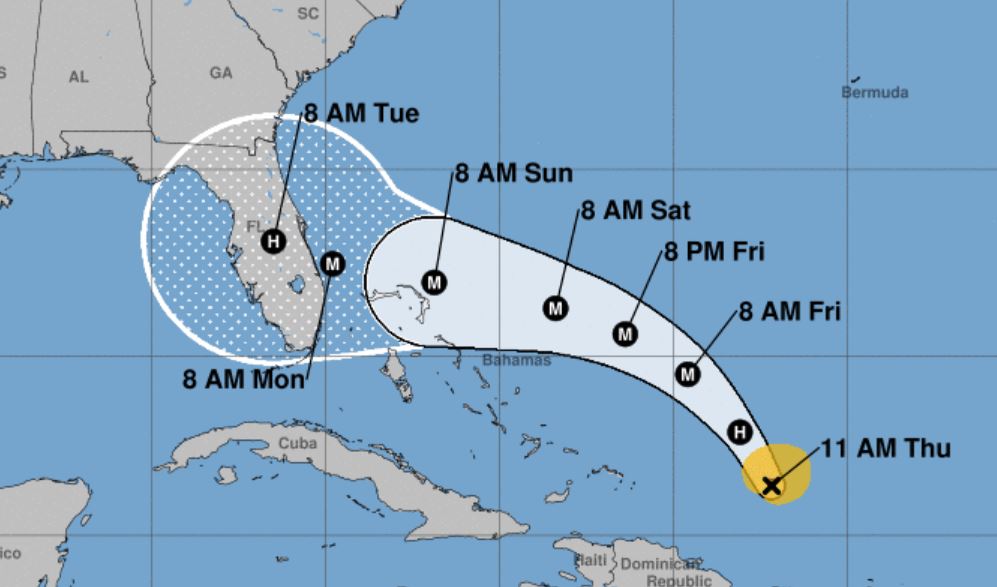 At 1100 AM AST (1500 UTC), the center of Hurricane Dorian was located near latitude 21.4 North, longitude 67.2 West. Dorian is moving toward the northwest near 13 mph (20 km/h), and this general motion is expected to continue through Friday.

A west-northwestward motion is forecast to begin by Friday night and continue into the weekend. On this track, Dorian should move over the Atlantic well east of the southeastern and central Bahamas today and on Friday, approach the northwestern Bahamas Saturday, and move near or over portions of the northwest Bahamas on Sunday.

Maximum sustained winds are near 85 mph (140 km/h) with higher gusts. Strengthening is forecast during the next few days, and Dorian is expected to become a major hurricane on Friday, and remain an extremely dangerous hurricane through the weekend.

The minimum central pressure based on data from a NOAA Hurricane Hunter aircraft is 986 mb (29.12 inches).

The small eye of Dorian has appeared intermittently in infrared satellite imagery this morning. Recent reports from a NOAA P-3 aircraft indicate that there is now a double eyewall structure, with a small inner eye only 5 n mi in diameter and a larger 25-n mi diameter outer eyewall. The minimum pressure has fallen to around 986 mb. The concentric eyewall structure is likely why the aircraft has not found any stronger winds yet in the storm, despite the decrease in central pressure. The initial intensity remains 75 kt for this advisory.

Aircraft and satellite fixes show that Dorian is moving northwestward, or 325 degrees at 11 kt. Dorian is forecast to continue moving northwestward during the next 24-36 hours between an upper-level low that will be dropping southwestward across the Florida Straits and a mid-level ridge to the northeast of the hurricane. After that time, a ridge is forecast to build to the north of Dorian, which should cause the track to bend back toward the west-northwest.

The track guidance becomes more divergent beyond 72 hours, primarily due to model differences in the strength of the ridge and whether a weakness develops in the ridge late in the period. The new NHC track forecast is virtually unchanged from the previous advisory, and lies very close to the multi-model consensus. It should be noted that the ECMWF, UKMET, and HFIP corrected consensus models remain south of the official forecast. The spread of the deterministic models and the various ensemble guidance is still considerable at days 4 and 5, and it is too soon to specify where along the Florida east coast the greatest impacts could occur.

Environmental conditions consisting of warm waters and low vertical wind shear along the path of the hurricane should allow for at least steady intensification during the next 2 to 3 days. With the small inner core and favorable conditions, rapid strengthening also remains a possibility, although not likely in the very short term given the concentric eyewall structure.

The updated NHC intensity forecast calls for Dorian to become a major hurricane on Friday, and shows a slightly higher peak intensity than the previous forecast. The official forecast is at the upper end of the guidance, in best agreement with the HCCA and HWRF models.

1. The risk of life-threatening storm surge and hurricane-force winds this weekend continues to increase in the northwestern Bahamas, and hurricane watches could be issued there tonight or Friday. Residents should have their hurricane plan in place and listen to advice given by local emergency officials.

2. There is an increasing likelihood of life-threatening storm surge along portions of the Florida east coast late this weekend or early next week, although it is too soon to determine where the highest storm surge will occur. Residents should have their hurricane plan in place, know if they are in a hurricane evacuation zone, and listen to advice given by local emergency officials.

3. The risk of devastating hurricane-force winds along the Florida east coast and peninsula late this weekend and early next week continues to increase, although it is too soon to determine where the strongest winds will occur.

4. Regardless of the exact track of Dorian, heavy rains are expected to occur over portions of the Bahamas, Florida, and elsewhere in the southeastern United States this weekend and into the middle of next week.