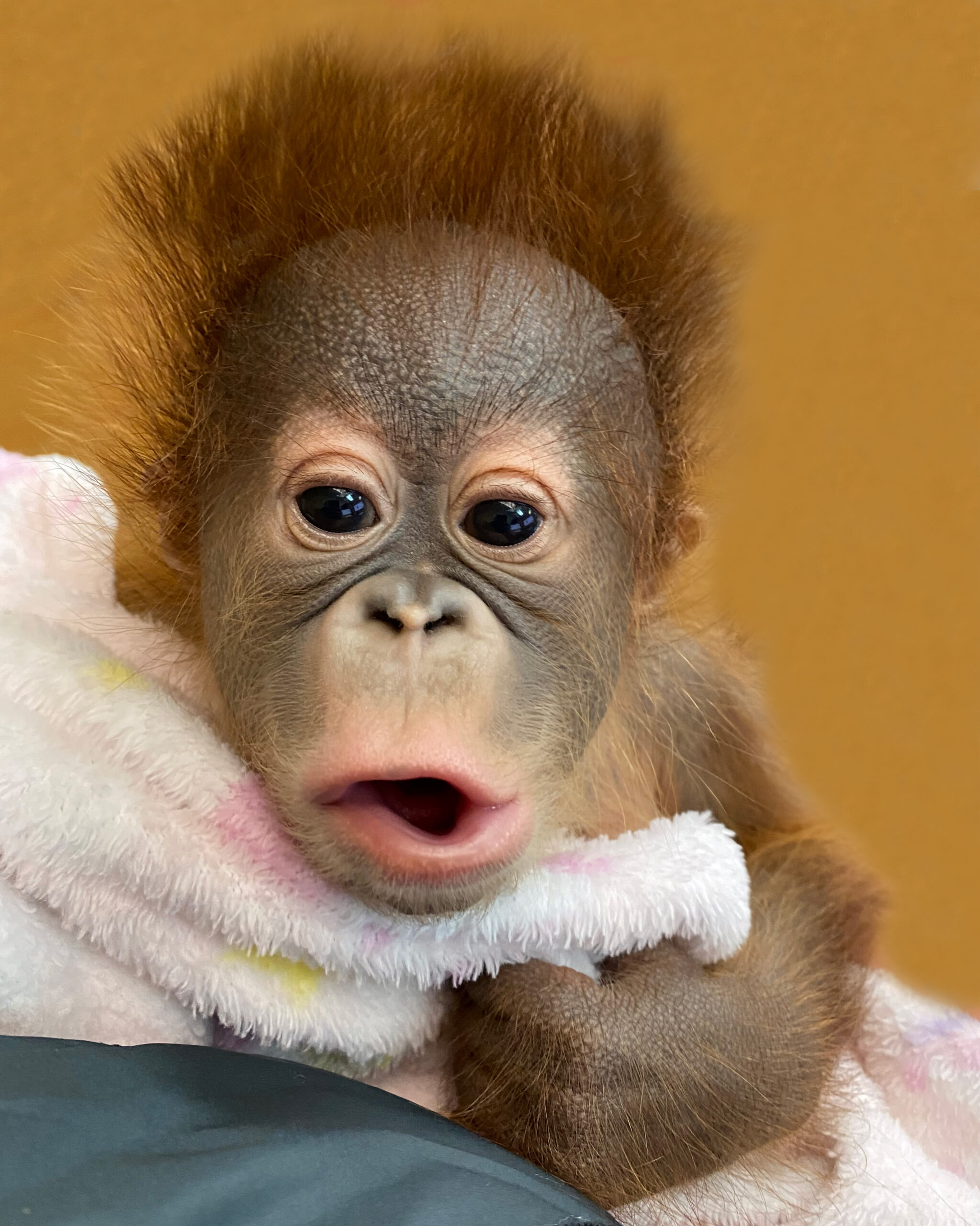 The Gulf Breeze Zoo is pleased to announce the recent birth of a female orangutan named Isadora who will serve as an important ambassador for her species.

“We have a lot to be thankful for this Thanksgiving,” said Jamie McMaster, Director of Gulf Breeze Zoo. “Every birth to our zoo is significant, but this particular arrival is especially exciting since orangutans are a critically-endangered species.”

Born on September 11, 2021, to mom, Indah, and dad, Louie, Isadora is now being hand-raised by animal care specialists due to Indah’s lack of maternal instincts toward the baby, causing zoo staff to intervene.

“Our animal care staff has been working round-the-clock to ensure she receives the best care possible,” said McMaster. “We’re thrilled to report that she continues to meet all growth and developmental milestones, and now weighs 7 pounds.”

The staff’s goal is to introduce Isadora to another orangutan to become her surrogate mother, but for now, she will remain in the care of zoo staff behind-the-scenes and will not be on exhibit.

Orangutans are found only in the diverse rainforests of Borneo and Sumatra. A close relative of humans, these great apes are among the most intelligent of primates. They can weigh anywhere from 70 to 180 pounds and can live to be 40 years old.

It is estimated there were about 230,000 orangutans in the wild a century ago. Today, they risk extinction. Fewer than 50,000 orangutans survive. Their numbers have rapidly declined due to human activities including hunting and unsustainable, often illegal, logging, mining, and deforestation. Palm oil harvesting continues to be a major driver of deforestation. As a result, the International Union for Conservation of Nature lists Bornean and Sumatran orangutans as critically endangered.

Gulf Breeze Zoo continues to respond to species decline and is focused on preserving animal populations, including orangutans.

The Gulf Coast Area’s award-winning Gulf Breeze Zoo is home to more than 1200 exotic animals, many of them threatened and endangered. Through admissions and animal encounters, each guest contributes to the conservation programs.

The Gulf Breeze Zoo opens at 9 a.m. daily and is located just off Highway 98. Visit www.GBZoo.com for updates, hours, events and more.

About Gulf Breeze Zoo – Gulf Breeze Zoo is one of three zoological facilities operated by the Zoofari Parks Corporation, working in conjunction with the Alabama Safari Park and the Virginia Safari Park to provide aid to over 135 countries around the world.  The Gulf Breeze Zoo is privately owned and receives no state or federal tax support. Funding for conservation programs are made possible through the continued support of zoo guests. Conservation is fundamental in our daily operations and visitors are encouraged to join us in making a difference on this journey.