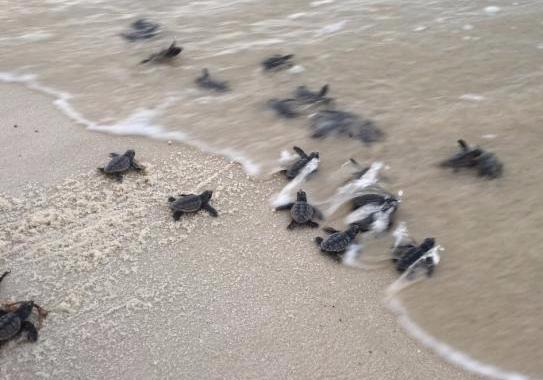 Keeping beaches dark at night and free of obstacles will help sea turtles during their nesting season, which begins in Florida on March 1 and lasts through the end of October.

Bright artificial lighting can misdirect and disturb nesting sea turtles and their hatchlings, so beachgoers should avoid using flashlights or cellphones at night. Turning out lights or closing curtains and shades in buildings along the beach after dark will ensure nesting turtles are not disturbed as they come ashore and hatchlings will not become disoriented when they emerge from their nests. Clearing away boats and beach furniture at the end of the day and filling in holes in the sand are also important because turtles can become trapped in furniture and get trapped in holes on the beach.

Florida’s beachfront residents and visitors taking these actions will help conserve the loggerhead, leatherback and green sea turtles that nest on the state’s coastlines.

Exactly when sea turtle nesting season starts depends on where you are in Florida. While it begins in March on the Atlantic coast from Brevard through Broward counties, it starts later in the spring, in late April or May, along the northeast Atlantic, the Keys and Gulf coasts.

Wherever you are, other ways to help sea turtles include properly disposing of fishing line to avoid entanglements, and reporting those that are sick, injured, entangled or dead to the FWC’s Wildlife Alert Hotline at 888-404-FWCC (3922) or #FWC or *FWC on a cellphone.

Go to MyFWC.com/SeaTurtle for more information on Florida’s sea turtles, and click on “Research,” then “Nesting” for more data on sea turtle nesting.