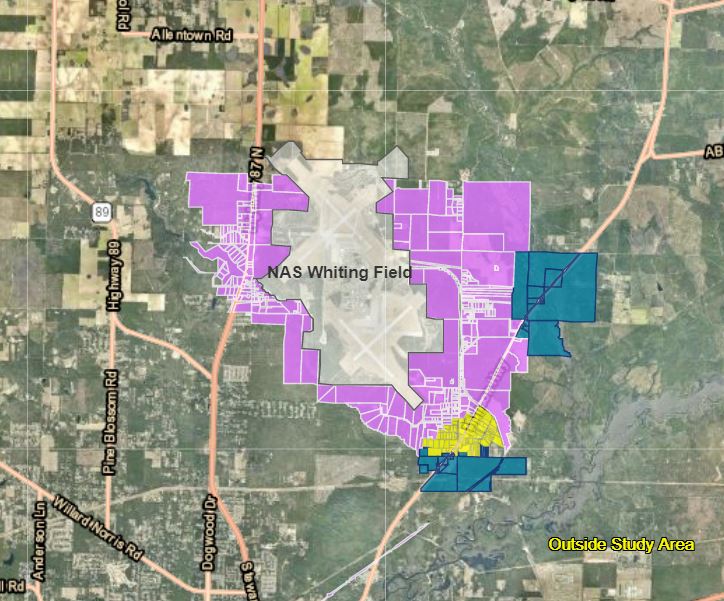 The U.S. Navy is expanding the area the to test drinking water wells during its ongoing private drinking water testing around Naval Air Station Whiting Field and its Outlying Landing  Fields (OLFs) in Florida and Alabama for the emerging, national environmental issue of PFAS (per- and polyfluoroalkyl substances).

Maps of the expanded sampling areas are available at: https://WhitingFieldPFAS.com.

Overall, the Navy has sampled 618 private drinking water wells near NAS Whiting Field and at OLFs in Florida and Alabama. Validated results indicate that PFOS (perfluorooctane sulfonate) and/or PFOA (perfluorooctanoic acid), were above the U.S. Environmental Protection Agency’s lifetime health advisory level in drinking water from 16 private wells (11 near NAS Whiting Field, 4 near OLF Barin, and 1 near OLF Wolf) contain PFOS and PFOA are two PFAS which have been more widely used and studied than most other PFAS

The Navy is providing bottled water for drinking and cooking to residents with private drinking water wells with concentrations that exceed the EPA’s lifetime health advisory as we work toward a long-term solution. The Navy will periodically update property owners as the long-term solution is developed.

Out of respect for the privacy of the property owners, property-specific results will only be released by the Navy to the owner(s) of each individual well which was sampled.

The Navy continues to work directly with residents, community leaders and other federal, state and local agencies on this important national issue and will keep the community informed while respecting the privacy of individual residents.

Property owners in the expanded sampling areas have been notified by letter and can arrange sampling by calling 844-NASWFLD (844-627-9353).  Sampling is conducted at no cost to the property owner.

The Navy commenced its drinking water sampling program for NAS Whiting Field and its OLFs in June 2021.

If there are residents in the initial sampling areas that have not previously scheduled an appointment, they can also call to schedule an appointment.

The Navy encourages property owners in the identified sampling areas to have their wells sampled.

Updates and additional information on this project is available at https://WhitingFieldPFAS.com

The Navy, in cooperation with other federal, state and local environmental and health agencies, has a virtual open house set up online at https://WhitingFieldPFAS.com that will be available November 4 where the public can learn more about the ongoing investigation.

The investigation has included testing private drinking water wells in and around certain parts of NAS Whiting Field, OLF Harold, Holley Field, OLF Pace, OLF Santa Rosa, and OLF Spencer; and in Alabama, OLF Barin, OLF Summerdale, OLF Silverhill, OLF Wolf, OLF Brewton and OLF Evergreen to determine if they are impacted from past releases of AFFF containing PFAS, which are classified by the EPA as unregulated or “emerging chemicals of concern” and have no regulatory standards or routine water quality testing requirements.

The sampling will help the Navy determine if additional actions are needed to protect human health and the environment.