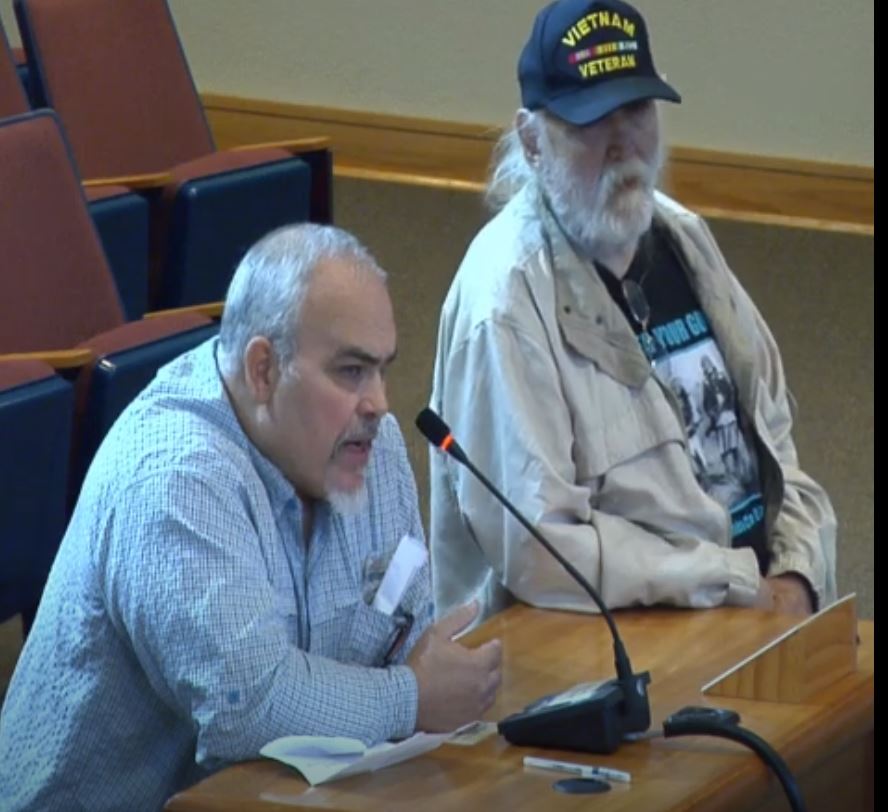 Mullins at the podium during Tuesday’s County Commission meeting. He provided the board with an excuse letter from his physician and his empty bottle of prescription pain medication. He was joined at the podium by Wayne Smiley, who told the board he drove Mullins to and from the “God & Country Rally” radio interview.

Santa Rosa County Zoning Board Member Sam Mullins, who in March had back surgery, on April 27  demanded and received a public apology from District 5 Commissioner Colten Wright, who had made negative comments to the media about Mullins’ April 8 absence from a zoning board meeting.

Mullins, during Tuesday’s county commission meeting, told the board he had advised county staff prior to the March zoning board meeting that he would be out about two months due to back surgery.

“I’m not going to come as a volunteer member of the zoning board and make decisions about people’s lives, their property when I’m under a doctor’s care (on pain medication)…So for me to have my character publicly besmirched by a commissioner is wrong,” Mullins said. “I demand a public apology from Colten Wright.”

Wright said his comments were based on “accountability” and stemmed from Mullins missing the April 8 zoning board meeting but going on an April 9 radio show to promote an April 10 2nd Amendment Rally.

“I understand you had surgery, and I understand it was painful and I understand you are on medication,” Wright said, “If I have an employee that is out sick, calls in sick, is out under doctor’s orders or any of those things and they can’t come to work for a scheduled shift, it’s an excused absence. But then they go and do something else that’s in contradiction…they go to a concert, they’re seen a bar, they go do a radio interview, anything. I, as an employer, would call that into question. I would question their commitment to their job and the reason for them being out, why that then allows them to another thing the following morning. I didn’t call you by name.”

Mullins corrected Wright, explaining it was not a 2nd Amendment Rally but rather a “God & Country Rally,” which he and about 10 others had organized prior to his surgery. Mullins said a friend drove him to the radio station for the roughly 20-minute interview and that he afterwards returned home to bed.

He expressed disappointment that Wright, whom he had considered a friend, didn’t call him on his cell phone or ask county staff why he was absent. Additionally, Mullins provided the board with a letter from his physician and his empty prescription pain medication bottle.

“It seems like it would have been a lot safer, rather than to have someone drive you over you all the way over there and it be discomfortable (SIC) across the Interstate and all that ride with your back, you certainly could have just laid in bed and made that phone call into the radio station,” Wright said.

Mullins said he feels so strongly about His God and county and Constitution that he endured the pain that day to promote the rally.

“I’m sorry. I in no way was trying to hurt your feelings or insinuate that you were a bad person. I, much like you guys, was just concerned about accountability,” Wright said.

Mullins said he accepted the apology.